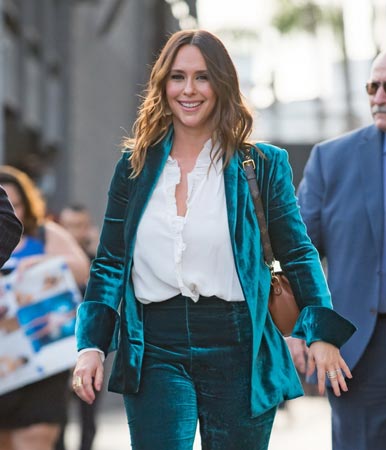 Jennifer Love Hewitt is ending the summer on a high note. On Thursday, Sept. 9, the 9-1-1 star appeared to announce the arrival of her third child while posting from a hospital room.

“Well this is how my kids sent me to the hospital,” Jennifer wrote to her followers. “My belly was a big hit. ‘It is said that women leave their bodies in labour…they travel to the stars to collect the souls of their babies, and return to this world together.'”

The actress continued, “It was my greatest honour to go and collect you Aidan James. Now back to snuggles and resting.”

Soon after the post, Jennifer shared posts from friends congratulating her on the arrival of her third child with husband Brian Hallisay. And yes, many fans expressed their approval of baby Aidan after remembering Jennifer’s character in Ghost Whisperer had a child with the same name.

Back in May, Jennifer first shared the good news that she was expanding her family and expecting another child. She is already the mom to 7-year-old daughter Autumn James and 6-year-old son Atticus James.

At the time, the actress admitted that her pregnancy was a bit of a surprise. “We had always been open to a third, but definitely didn’t think in the crazy year that the entire world was having that it would necessarily be this moment,” Jennifer shared with People. “I feel like we’ve been able to so far raise two really special kids who will be great role models.”

She added, “This has been such a pleasant, beautiful, surprising gift in this time to be able to get to do all that again with another little human.” As fans wait to see how Jennifer’s pregnancy plays out in the new season of 9-1-1, returning Sept. 20 to Fox, the actress appears excited for a new chapter in her family, which now includes a few helpful older siblings. “They’re really looking forward to it,” she previously told the publication. “They’ve both done some practicing what jobs they’ll have-but, definitely, they both have fully decided there will be no diaper-changing for them, which I respect and wouldn’t expect them to do, honestly!”