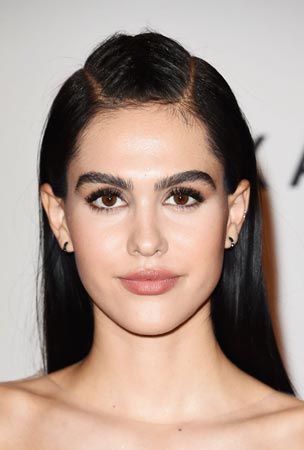 Now that Amelia Hamlin’s relationship with Scott Disick is officially out of fashion, she’s living it up as a single girl at New York Fashion Week.

Just days after their split, the 20-year-old model is ready to get back “in action,” she exclusively told E! News from the red carpet before Prabal Gurung’s show. Without mentioning her ex, she said she’s trying not to let the “stress” of the hectic week get to her. E!’s Zanna Roberts Rassi asked Amelia if she’s feeling relaxed. The star paused: “Relaxed?!” she teased, laughing. “But I love the stress,” she added.

On Sept. 8, she walked the Dundas x Revolve runway, as well as the Bronx and Banco fashion show, and it sounds like Fashion Week has been a welcome escape.

“It’s so much fun and I’m so grateful to be here,” shared the daughter of Harry Hamlin and Lisa Rinna, who reacted to Amelia’s breakup with Scott by posting a smiley face emoji on Instagram.

Scott’s ex, Kourtney Kardashian, also wasn’t too surprised to see them call it quits after 11 months.

“Kourtney didn’t mind Amelia, but she never expected it to last,” a source close to Kourt told E! News on Tuesday, Sept. 7. “Kourtney is focused on her own life and her kids. Who Scott dates is not her problem. Her only concern is that Scott is an active and focused dad. She wants him to be the best dad he can be.”

A separate source revealed that Amelia broke up with Scott over the weekend, before NYFW. The second insider noted, “Scott agreed that he feels he needs to be single right now. They had a lot of fun together but it was never going to be a long term relationship.”

During the turmoil, Amelia gave insight into how she was feeling by posting a quote that read, “Never settle for less… You deserve the best.”