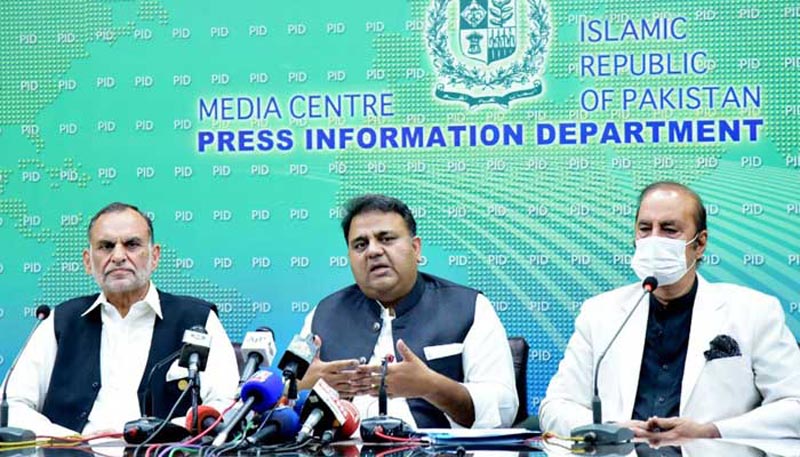 Federal Minister for Information and Broadcasting Fawad Chaudhry on Friday said that it seems the Election Commission of Pakistan has ‘become the headquarters for opposition parties’ and the chief election commissioner is ‘acting as their mouthpiece’.

Speaking during a press conference in the federal capital alongside Minister for Railways Azam Khan Swati and Adviser to the Prime Minister for Parliamentary Affairs Babar Awan, Fawad said the government has no objection if the CEC had any personal sympathy with Nawaz Sharif as obviously he had remained in close contact with the former prime minister in past, but, he added, let it be clear that whether it was the ECC or any institution, it would have to follow the acts passed by Parliament. “Nobody would be allowed to undermine the Parliament’s supremacy,” he said, adding that if ECP had any objection on use of technology and any improvement in system they should share with the government.

He asked the CEC to present himself as a head of the state institution instead of issuing directions instructions to different organizations with regard to the EVMs. The CEC should forthwith stop politicking while being head of the ECP, he said, adding if he had interest in politics then he should leave the post and contest election for entering into political arena. The minister said the logic of ECP that the Parliament had no right to guide it on electoral procedure was ‘unfair’ as the Article 218 of the constitution itself stated that the polls would be held in accordance with the law.

Fawad said no one is satisfied with the ECP because “it comes up with strange logic.” He said that the PTI-led government had promised to make the ECP free, fair, and transparent, and to that end, a commission for reforms headed by Justice Nasirul Mulk was also formed. However, the ECP remains surrounded by controversies due to its “strange logic”.

He said that PML-N leaders are trying to make legal amendments related to the use of EVMs “controversial”. The minister said that the chief election commissioner should “either take a look at his behaviour or join politics.”

“You better not become a tool used by small political parties,” Chaudhry told the chief election commissioner. He added that whenever the Opposition loses in elections, it starts crying foul about rigging. “Our Opposition comprises intellectually-stunted parties. The only skill they have is to seek extensions for the hearings of their court cases.”

Moreover, the bill had to be passed by the Senate in 90 days but it was rejected only a few hours before the conclusion of the stipulated 90-day period, he said.

“It is for the first time in history that the Senate committee bulldozed the government’s legislation,” he said. “We have now decided to take the bill to the joint session of the Parliament on September 13 and will convene a National Assembly session a day after that.” Awan said that the government will soon complete the legislation under a Supreme Court order.

PM Advisor for Parliamentary Affairs of Pakistan Dr Babar Awan termed the opposition as an enemy of electoral reforms. He said that they would pass all the bills in the upcoming joint session of the parliament. Federal Minister Azam Swati also leveled serious allegations against the Election Commission of Pakistan (ECP) of taking bribes.

During the session of the Standing Committee on Parliamentary Affairs, Swati criticized the commission for making fun of the parliament. Reacting to the statement of Azam Swati, the ECP officials walked out of the meeting in protest.