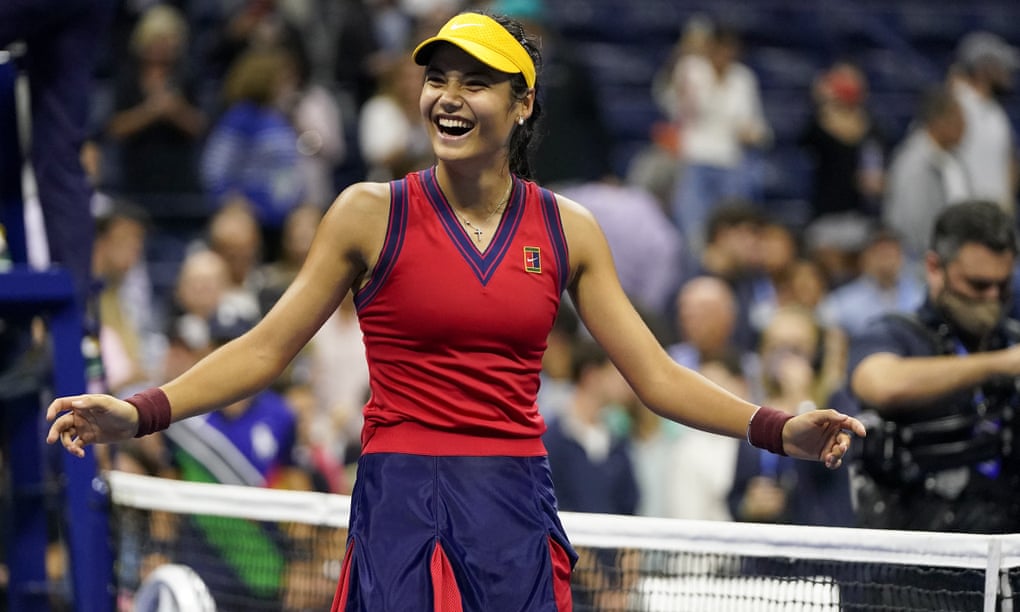 When Emma Raducanu arrived at Flushing Meadows this year, she did not have the faintest idea of where to go. So unfamiliar was she with her surroundings, she needed help from her fellow players just to navigate the tournament’s vast grounds.
Her growth over the past three weeks since those timid first steps has been astounding as she outplayed everyone put in front of her. And under the lights of the Arthur Ashe Stadium on Thursday night she went even further, producing yet another brilliant performance to reach her first grand slam final.Faced with a moment she has been dreaming of her entire life, Raducanu handled the occasion with the remarkable composure that has defined her rise as she outclassed Maria Sakkari, the Greek 17th seed, 6-1, 6-4.

“Honestly, the time here in New York has gone so fast,” she said after the match. “I’ve just been taking care of each day and, before you know it, I’m in the final and I can’t believe it.”

She will face another teenager, 19-year-old Leylah Annie Fernandez, after the Canadian extended her own astonishing run by scuppering the second seed, Aryna Sabalenka, 7-6 (3), 4-6, 6-4. Together the two players, who last faced each other at junior Wimbledon in 2018, will contest the first grand slam final between teenagers since Serena Williams and Martina Hingis met at the 1999 US Open

Standing between Raducanu and the final was one of the biggest servers and most athletic players on tour. Sakkari had unfinished business when she stepped on court: at Roland Garros this year, in her first-ever grand slam semi-final, she had faltered when she held match point against Barbora Krejcikova.

Sakkari’s drive was obvious at the start of the match. Over the first two games, Raducanu faced seven break points but she demonstrated her toughness by saving them all, and broke for good measure to lead 3-0. As Sakkari struggled to find her level, Raducanu grew. She seemed to occupy every part of the court, neutralising Sakkari’s weight of shot with her movement and effortlessly flipped from defence to offence. Sakkari sprayed unforced errors and found herself 5-0 down before Raducanu tidily closed off the first set.

Sakkari opened the second with far greater energy, slamming down a quick hold. But while the Greek player was untouchable on her serve against Karolina Pliskova in the previous round, Raducanu handled Sakkari’s biggest weapon by landing difficult returns at her feet. In Sakkari’s second service game of the set, Raducanu laid waste to the Greek’s serve, pressuring her first serve and attacking her second to break.

The Briton then held serve with an ace and soon found herself up 6-1, 3-1 with double break point. But after Raducanu overhit a forehand and shanked another, Sakkari held serve and the tension rose as the Greek marched around the court determined to recover.

How did Raducanu respond? She served brilliantly as she held to love for 4-2, snapping a backhand down the line on game point. Although Sakkari finally settled into her own service game, Raducanu came out at 5-4 and served out her first grand slam semi-final with ease.

And so this unprecedented journey, which began in the qualifying rounds in the heat of August, goes on. Raducanu is already up to 31st in the live rankings, meaning she has put herself in position to be seeded at the Australian Open after starting the summer as the world No 366 and playing just four tour-level tournaments. Across her nine matches since the qualifying draw, she has yet to drop a set.

Given how sparse her resume is, it would have been perfectly understandable for her to have stumbled over the past week. But she does not care. She is here to take her journey match-by-match, and she has arrived at each one with unwavering belief that she can beat the opponent across the net. Each time she has. “Is there any expectation? I’m a qualifier so technically, on paper, there’s nothing. No pressure on me,” said Raducanu on court after her victory.

That youthful fearlessness has, of course, been the defining trend of the US Open. Fernandez had arrived at the tournament ranked 73rd and in indifferent form yet after upsetting Naomi Osaka, the defending champion and third seed, in the third round, she followed it with wins over the former champion Angelique Kerber, the fifth-seeded Elina Svitolina and then Sabalenka.

With her victory, Fernandez became the youngest woman to reach a grand slam final since Maria Sharapova at Wimbledon in 2004. Less than two hours later, Raducanu took the record for herself.