Jessica Chastain explains the secret to her chemistry with Oscar Isaac

* Unfortunately for fans shipping the couple, Chastain and Isaac are both married to other people, something she made clear during an appearance on 'Today' on Wednesday 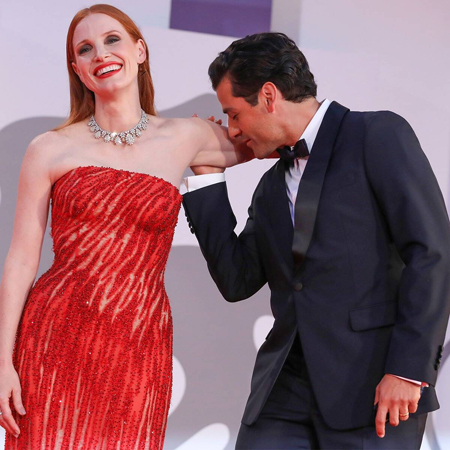 While Jessica Chastain and Oscar Isaac were promoting Scenes from a Marriage, the Internet couldn’t help talking about their scene from the red carpet.

After stepping out at the Venice Film Festival, the co-stars went viral thanks to a slow-motion clip of Isaac appearing to try and kiss Chastain’s arm before seemingly sniffing her armpit while on the red carpet. It didn’t take long for the buzz to grow as viewers speculated over their relationship status-and developed a giant collective crush on Isaac.

Unfortunately for fans shipping the couple, Chastain and Isaac are both married to other people, something she made clear during an appearance on Today on Sept. 8. While she wed Gian Luca Passi de Preposulo in 2017, Isaac tied the knot with Elvira Lind that same year. As for their undeniable chemistry, credit their real-life friendship.

“We went to college together, so we’ve been friends more than half of our lives and we know so much about each other,” Chastain said on Today on Sept. 8, referencing their days at the Juilliard School. “We know how to make each other laugh without even saying anything. We can almost read each other’s minds, but that also means we could hurt each other really strongly, so in the scenes we would know how to get to the other one.” This isn’t the first time they’re starring opposite each other, either. In 2014, they played a husband and wife in JC Chandor’s a Most Violent Year.

There’s also that slow-motion effect. As Chastain pointed out, “Everything is super sexy in slow motion.”

If you’re still trying to decipher why Isaac would sniff her armpit on the red carpet, according to the actress, he was really going to give her a peck near her elbow, but she turned to give him a hug at the same time. “He made a joke out of it,” she said, noting that you can see him smiling in the footage.

Whatever the case, fans are clearly enjoying the moment, even if it only looked flirty. “We have all been locked in our houses for so long,” Chastain said on Today. “When this video went viral, I was like, ‘People just need to see people touch.'”