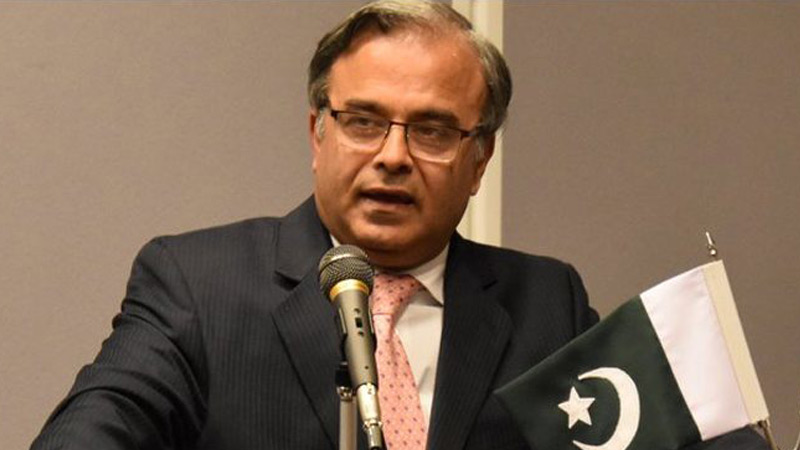 Washington: On Wednesday Pakistan’s top Diplomat Asad Khan said in an interview that Pakistan will remain a key partner in the U.S. counterterrorism campaign.

“We are on the same side in Afghanistan,” Asad Khan told. He said that the world should give the Taliban a chance to uphold their leaders’ vows to reject terrorism and respect basic rights. He further said the Taliban have made repeated commitments of not allowing the Afghan territory to be used against any country by any terrorist group, still governments and private analysts fear the victory by the Taliban.

Taliban claim that they have changed their ways since giving haven to Al Qaeda during the years leading up to 9/11 are facing sharp scrutiny in Washington. The developments of the past month have thrust a new spotlight on the notoriously tumultuous U.S.-Pakistani strategic relationship, he said.

During the discussion, Mr. Khan sought to downplay the notion that the Taliban takeover in Kabul amounts to a strategic win for Pakistan. He also clarified that reports about Pakistani military forces deployment in Afghanistan to help the Taliban seize the country and that Pakistani military aircraft have assisted the militants in battling Afghan nationalist and anti-Taliban holdouts north of Kabul are bogus and laughable. On a question about the recent meeting in Kabul between Lt. Gen. Faiz Hameed and Mullah Abdul Ghani Baradar he said it was normal as the reported meeting last month in the Afghan capital between CIA Director and Mullah Baradar.

He said that some experts claim that Pakistan has carefully played both sides of the war in Afghanistan to protect its own interests, even as Pakistanis, we have been hit by extremist attacks emanating from the war zone. Afghanistan‘s future is deeply uncertain, the developments unfolding in Kabul are “not really a question of anyone’s victory or anyone’s loss,” Mr. Khan said. He further added, “If we are unable to win the peace in Afghanistan, frankly, it will be everyone’s loss, and that’s what we are working for and I think it is only important that there is an inclusive government that represents the diversity of Afghanistan, and I’m sure Taliban are also mindful of that.” he maintained.

Mr. Khan told, that Islamabad is eager to enhance its “counterterrorism relationship” with Washington. He said, “We have worked together in combating the terrorism threat, and there still are threats that we perceive as common threats, and we will continue to work together with the United States in combating those threats.”

He further said, US-Pak interests are common here we want peace in Afghanistan, we definitely don’t want to see Afghanistan act as a safe haven for terrorists. We would also not like to see the situation in Afghanistan turn into a civil war or fall apart and avoid a refugee crisis. I think the United States has the same position on that,” he said.

“The U.S. [also] is home to a very vibrant and influential Pakistani-American diaspora, and then, our military links, our educational links, our cultural links … all these are very, very important contributors to why we should have a strong and close partnership with the United States,” he concluded.