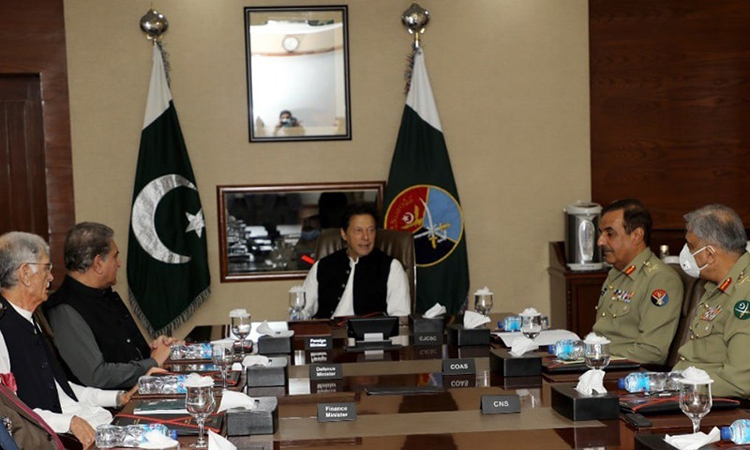 The National Command Authority (NCA) on Wednesday asserted that Pakistan will take all measures to ensure the strategic stability in region without entering into any arms race.

Prime Minister Imran Khan chaired the 25th meeting of the NCA here at the headquarters of the Strategic Plans Division. All members of the NCA including federal ministers of foreign affairs, defence, finance and interior; chairman Joint Chiefs Of Staff Committee; chiefs of army, navy and air force; and director general Inter-Services Intelligence (ISI) attended the meeting.

According to a press release issued by the PM Media Wing, the NCA expressed full confidence in the command and control systems as well as security measures in place to ensure comprehensive security of strategic assets of Pakistan. The NCA reaffirmed that Pakistan as a responsible nuclear state would continue to contribute meaningfully towards the global efforts to improve nuclear security and nuclear non-proliferation measures.

A detailed briefing was given to NCA on evolving conflict dynamics in the region. The NCA noted with concern the destabilising massive arms build-up in the conventional and strategic domains. The NCA viewed these developments as detrimental to peace and security and asserted that Pakistan would take all measures to ensure the strategic stability in the region without entering into an arms race.

The NCA reiterated maintaining full spectrum deterrence in line with the policy of credible minimum deterrence and expressed satisfaction on the development of strategic capabilities. It appreciated high standards of training and operational readiness of the strategic forces, and appreciated the scientists and engineers whose dedicated contributions have enabled Pakistan to successfully pursue the desired objectives.

Meanwhile, Prime Minister Imran Khan Wednesday said the digitization and cadastral mapping of lands would ensure transparency in the land record and transactions besides, eliminating the besetting issue of land grabbing. He was addressing the launching ceremony of the digitization of land record and cadastral mapping of the Federal Capital Territory.

The prime minister said under the two-phase process, the digitization of lands and cadastral mapping was completed in Islamabad and would commence in Lahore and Karachi. Whereas in the second phase, it would be broadened to other urban areas of the country, he added.

The prime minister referring to the complexities of the past land record system observed that the common men had faced huge issues while their lands were grabbed by the powerful clique who had no regard for the land of law. “I will commend the efforts of Capital Development Authority and Survey of Pakistan for the completion of the survey of lands in Islamabad. Under the digital data system, lands worth Rs 400 billion were retrieved from the land grabbing mafia including Rs300 billion lands of CDA and the other Rs100 billion forest land,” he added.

Terming the process as ‘transformative’ the prime minister said, the land record would now be available online, facilitating the people through use of latest technology. He said with the use of this technology in Islamabad, 45 acres of green areas along the Srinagar Highway alone had now been stretched over to 113 acres, adding about, 1,000 acres of forest land was under the illegal occupation.

The prime minister further said poor people had always suffered at the hands of land grabbers, but now with the use of such technology, the state lands could be protected. He also opined that overseas Pakistanis had been the biggest assets of the country and they could be wooed to invest in the country by creating suitable environment and these technological gadgets could be conduits to facilitate them.

The prime minister mentioned that rule of law was vital for economic gains as it was the criteria which also ensured justice. He also regretted that chunks of lands belonging to overseas Pakistanis had often been under the illegal occupation by ‘Qabza group’, adding that about fifty per cent cases in the courts pertained to land issues. The powerful elements that had illegally encroached upon lands and amassed wealth would now have fears from the use of such modern technology, he added. The prime minister also maintained that his government was making strenuous efforts for afforestation of the country to tackle the looming issues of global warming and pollution by enhancing the forest cover.