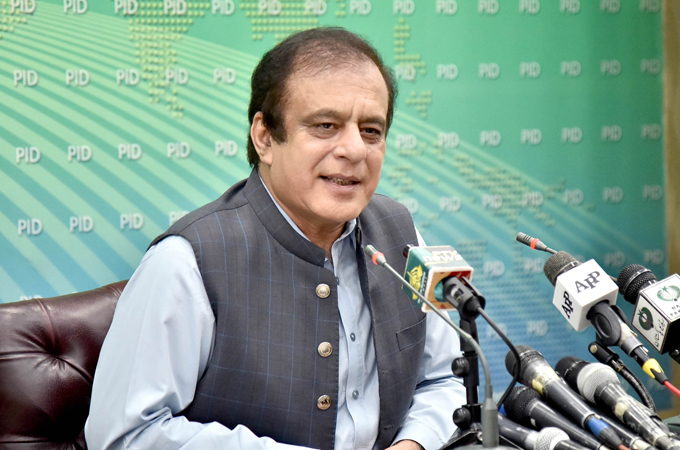 Minister for Science and Technology Syed Shibli Faraz Wednesday said that status quo forces and political parties used to win elections through rigging were not willing to adopt modern technology in elections due to their vested interests.

Addressing a press conference he said, “Status quo forces do not want free, fair, transparent and credible elections in the country, they were not against Electronic Voting Machines (EVM) due to technical issues, but they were against the use of technology due to vested interests.”

The minister was of the view that transparent elections were imperative to strengthen parliament and democracy.

He said that Electronic Voting Machine (EVM) would help ensure accuracy, transparency in the election results and the use of EVM in election would help prevent vote rigging and eliminating mistrust of the candidates over the polling as well as results compilation process.

He said that the whole world was transferring to modern technology and it was the accurate time to adopt this technology for making the election process transparent and creatable.

The minister emphasized that “We have to use technology in the general elections for restoring the confidence of the people over the electoral process and ensuring fairness”. Faraz said that elections in Pakistan were marred by controversy and the use of money and bullying in elections had become a culture. Prime Minister Imran Khan had given the first task to the Ministry of Science and Technology to work on manufacturing of EVM for ensuring transparency in the results, he added.

It is very unfortunate that the elections in the past have become controversial due to the lack of technology. “EVM is the best solution to curb electoral fraud and irregularities”, he emphasized. The minister said that around 184 million people in the country were using mobile phones and there were 120 million registered voters and for all these people, technology usage was not a new thing.

He said that the EVM did not have any internet connection wi-fi, bluetooth or operative system due to which “neither could it be hacked nor can have bugs”. The minister said that the EVM had been shown at provincial assemblies, universities, Chamber of Commerce and Bar Council. He said that the opposition was rejecting EVM without even using it, adding that all opposition parties should nominate their experts to check this machine and find out its flaws if any and the government would address those accordingly.

He urged the opposition political parties to set aside their personal interests and work for the coming generations.

To a question, he said EVM was a self-contained voting machine which could work properly in extreme temperatures up to 55 C and in low temperatures up to -10C. It can work without electricity with a battery backup of 24 hours. To another question, the minister said that a total 400,000 EVMs would be required to hold 2023 general elections in the country, adding that at present the manufacturing capacity of these machines was 2000 units daily and within five to six months the 400,000 machines could be manufactured.

He said that out of 37 recommendations made by the Election Commission of Pakistan to the committee asked for the enhancement of its capacity, while only 10 suggestions belonged to EVMs which had already been addressed.