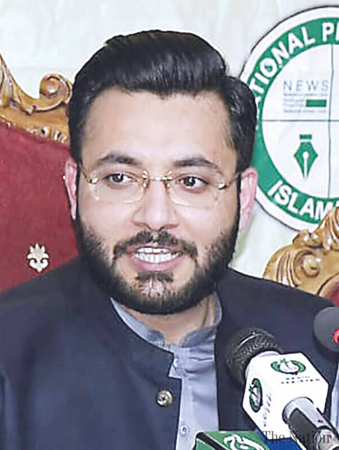 Minister of State for Information and Broadcasting Farrukh Habib on Wednesday asked Maryam Safdar to produce evidence to prove her innocence before the court in the Avenfield case.

“I challenge Maryam, who has been convicted by the accountability court in the Avenfield reference, to produce supported evidence and request the court to hear her case on daily basis if she assumed herself innocent,” he said while talking to media persons in response to the PML-N vice president talk, she did after her appearance before the court which was hearing her appeal against the conviction.

The minister expressed the hope that this time Maryam would not submit a ‘Qatari’ letter to the court as evidence.

Farrukh said the Pakistan Muslim League-Nawaz (PML-N) had already helped her father Nawaz Sharif, whose conviction had been restored by the court after rejecting his appeal in a corruption case, to escape the country and jail term. It was very unfortunate that her father, instead of returning to Pakistan, was watching polo matches and strolling Hyde Park in London, he added.

The minister said likewise, her daughter Maryam also took refuge behind adjournments and opting to delaying tactics to further slow down the accountability process.

He said appeal of Maryam Safdar was being heard by the Islamabad high court for since long and she, instead of seeking day-to-day hearing, made different excuses to abstain from appearing before the court.

Initially, he said, Maryam made excuse that her appeal against conviction in the Avenfield reference was not being heard on a regular basis, but, in fact, she, through her lawyer, had so far sought adjournment of her case ten times.

The minister said when the court remarked today that now the case would be heard on regular basis at all cost, she sought more time for hiring another lawyer as the previous one had excused from pursuing her case any further.

Opting to delaying tactics and taking refuge behind adjournments was an old habit of the Pakistan Muslim League-Nawaz (PML-N), he said, adding it was the same practice through which they were trying to further delay decision in a corruption case against their party President Shehbaz Sharif.

He recalled that the party had adopted same tactics in the Hudaibiya Paper Mills case which was not heard on merit and later dismissed on technical grounds.

The fundamental question from Sharif family was that as to how they fell ill whenever they were asked about their corruption and faced accountability process, he added.

Earlier, it was told that Nawaz Sharif was not well and health condition of Shehbaz Sharif was serious, but now, interestingly, they claimed that their lawyer fell ill.

The minister said the same lawyer Amjad Pervaiz was appeared before the Accountability Court in a case on August 31.

When this lawyer could appear before the court just a day before Maryam’s hearing then how he could not appear in her case, he added.

The minister said that it seemed that Maryam, herself, had asked the lawyer to stop from pursuing the case in which she was convicted for seven years and a fine of two million pounds imposed on her for not producing money trail of the Avenfield flats before the court.

Farrukh recalled Maryam’s past statement in which she said she did not own any property in Pakistan, as well as, in London and said the nation knew that she was the same woman who ridiculed herself by producing fake ‘Qatari’ letter in the court as evidence.

He said the PML-N knew that they had looted the country ruthlessly and had nothing to prove their innocence that was why they opted to different delaying tactics to bide time against ongoing accountability process.

The minister said Pakistani nation did not only want logical conclusion of their cases, but also desire to see the ‘corrupt’ leadership of PML-N behind bars for looting national wealth ruthlessly.

He called for early verdict on the appeals on those who looted the national wealth ruthlessly so that accountability process could continue unabated.

Commenting on the rift within the PML-N, Farrukh said the factions of Maryam and his uncle Shehbaz had brought their fight to the media. Maryam did not bother to respond when asked today that whether the PML-N current president Shehbaz would be nominated for slot of Prime Minister of Pakistan in the next general election, he added.

The minister said the rift between PML-N, PPP had deepened further as both the parties were fighting over the slot of opposition leader.