* Buzdar says government has allocated Rs 190 billion for development of southern Punjab, which is 33 per cent of entire provincial budget 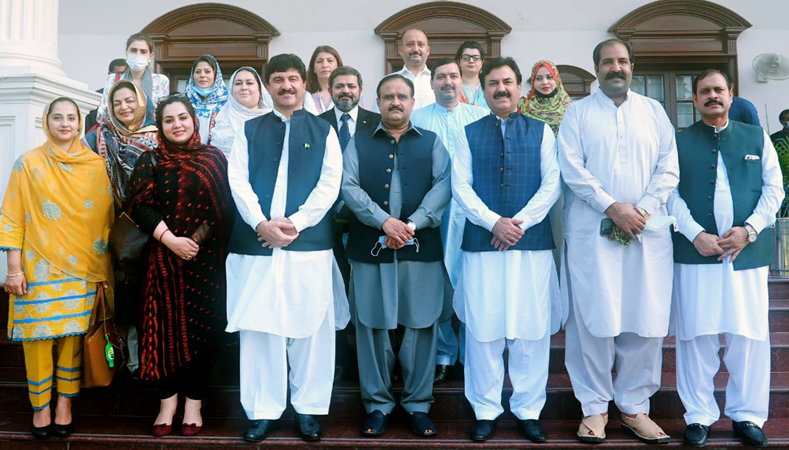 Chief Minister Punjab Sardar Usman Buzdar has said the PTI-led government is committed to removing the deprivations of people of south Punjab and pointed out that historic decisions have been made to give autonomy to the south Punjab secretariat.

In a statement, the CM expressed his satisfaction that amendment in rules of business has been approved and powers of ACS, secretaries and departments have been properly defined. The south Punjab secretariat will comprise of three divisions, 11 districts and the number of government departments will be 17; he explained and added that south Punjab ACS and secretaries have been administratively empowered. The government has also allocated ring-fenced Rs 190 billion for south Punjab which is 33 per cent of the budget, he added.

Meanwhile, the establishment of the south Punjab service tribunal has been approved and the foundation stone of the south Punjab secretariat will also be laid in Bahawalpur soon. The government has fulfilled its promises made with the people of south Punjab and the historic steps will help to resolve public problems at the grassroots, concluded the CM.

The Pakistan Navy wrote a new history of intrepidity and greatly distinguished itself on September 8, 1965, by beating the enemy while defending the sea-frontiers.

In a statement, Chief Minister Punjab Sardar Usman Buzdar expressed the satisfaction that the Pakistan Navy thwarted the nefarious designs of the enemy and destroyed its naval power. The Pakistan Navy proved its mettle in the war and its unforgettable role will always be written in golden words, he appended. The Pakistan Navy is the pride of the nation and Navy Day is an occasion to commemorate its role in defending the country, concluded the CM.

Chief Minister Punjab Sardar Usman Buzdar has said knowledge promotes necessary awareness. Nations have achieved the pinnacles of glory because of their educational and research environment.

In his message, the CM emphasized that the Punjab government was working hard to impart quality education to every child as it is their fundamental right. While highlighting the performance of the Punjab government, the CM said Punjab School Education Policy, 2020 has been introduced for the first time and special attention is paid to educate the transgender community. The maiden transgender school has been established in Multan, he noted.

The CM disclosed that more than 7000 schools will be upgraded in the current financial year while the total number of upgraded schools will reach 27000. Meanwhile, conventional 5th and 8th exams have been discontinued in government schools and a school-based assessment system has been introduced, he said.

The CM said the literacy rate has been increased due to governmental steps and a solid policy has been followed to develop the education system according to modern lines. A hundred per cent literacy rate is a commitment of the government and more steps will also be taken for education promotion; he assured and emphasized that collective efforts are needed to achieve the goal of an educated society.

A KPK parliamentarians’ delegation led by provincial minister Shaukat Yousafzai called on Chief Minister Punjab Sardar Usman Buzdar at his office on Tuesday and discussed matters of mutual interest. The CM assured to provide necessary assistance for the safe city project in KPK and both agreed to exchange of delegations to further strengthen mutual ties.

The delegation appreciated the steps taken by CM Usman Buzdar for the welfare of the people as well as the promotion of inter-provincial harmony. Our delegation has witnessed the spate of the development process in Punjab and we are happy about it; they said and invited CM Punjab to visit the KPK province.

CM Usman Buzdar asserted that colossal work is done in three years by the Punjab government to ensure balanced development. The past rulers remained engrossed in lip service while the PTI government has initiated genuine development work in the province to improve the quality of life of the people, he replied. Meanwhile, Punjab is following the policy of taking other provinces along to ensure composite development in the country. Similarly, district development packages have been introduced for unified development; the CM added and emphasized that he has introduced positive political traditions as he believes in tolerance and mutual respect.