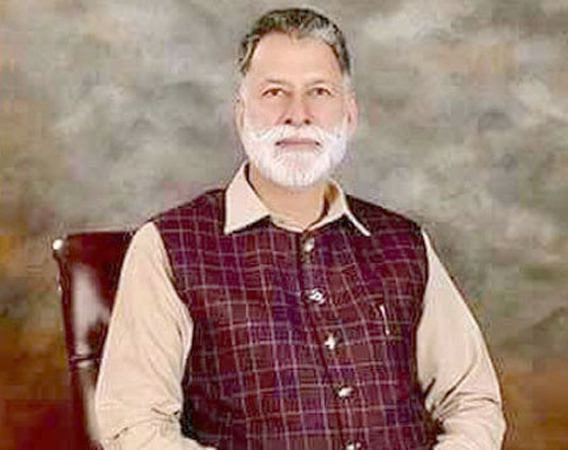 Governor Punjab Chaudhry Sarwar congratulated Sardar Abdul Qayyum Niazi on becoming the Prime Minister and expressed good wishes for him. Earlier in a meeting, they also mulled over establishment of rescue-1122 in Azad Kashmir.

Addressing the press conference, AJK Prime Minister Sardar Abdul Qayyum said that India could not suppress the voice of Kashmiris with the power of bullets because Kashmiris would continue fighting for their freedom with courage, adding that fundamental right should be granted to them. It is the responsibility of international human rights bodies, including the United Nations, to play their part in resolving the Kashmir issue and putting an end to the atrocities against the Kashmiri people, he added

Sardar Abdul Qayyum said that providing basic amenities and employment to the people of Azad Jammu and Kashmir was the top priority of his government. “We would like to thank the Governor of Punjab for assuring us of his support for the establishment of Overseas Commission and Rescue 1122 in Azad Kashmir,” he added.

Talking on the occasion, Governor Punjab Chaudhry Sarwar said that India had not only been exposed at the international level on diplomatic front but also Indian atrocities on Kashmiris have been exposed to the world, adding that peace in the region was not possible unless Kashmir issue was resolved according to the resolutions of United Nations. The Governor said that since Narendra Modi came to power, the lives of Indian Muslims had also become miserable along with the Kashmiris. Condemning the India’s role at death of Syed Ali Gillani, he said the behaviour of Indian authorities towards family of Syed Ali Gillani on his death, cases against his family was shameful and it was violation of basic human rights and highly condemnable.

He said, “Kashmir is a jugular vein of Pakistan and we are ready to give every kind of sacrifice for its freedom. By the grace of Allah Almighty the time will surely come when Occupied Kashmir will get freedom,” he added.

Chaudhry Sarwar said that he appreciates the Kashmiri people for supporting the policies of Prime Minister Imran Khan, adding that Federal and Punjab governments would stand with Kashmiri people for their progress and prosperity. He said In order to deal with the problems of overseas Kashmiris, we will support the establishment of overseas commission in Kashmir on the lines of Punjab Overseas Commission, adding that overseas Pakistanis were the biggest asset. The two dignitaries called upon the world community and the international organisations, especially the United Nations, to play their role in solving the long-standing dispute, which would result in durable and lasting peace in the region. They also discussed establishment of the Overseas Commission in Azad Jammu and Kashmir to facilitate expatriates in resolving their issues.

Sardar Abdul Qayyum Niazi said, “Under the leadership of Prime Minister Imran Khan, we will make Azad Jammu and Kashmir an economically strong and prosperous area.” He said that India’s vicious role had exposed to the world community during the events taking place after the death of Syed Ali Geelani. He said India could not suppress the freedom struggle of the people of IIOJK through guns and bullets. The AJK prime minister said that people of Indian Illegally Occupied Jammu and Kashmir had been fighting for their freedom from India with courage, and they would soon succeed in achieving their legitimate right.

Punjab Governor Ch Sarwar assured the AJK PM of full cooperation in development of all sectors including health in Azad Jammu and Kashmir. The Punjab government would fully support the people of AJK and also help provide Rescue-1122 service in the region, he vowed. Ch Sarwar said that India had now been isolated and its atrocities and tyrannies in IIOJK had been exposed to the world. “We will continue to stand with our brethren in Indian Illegally Occupied Jammu and Kashmir, who are being suppressed by the brutal Indian forces,” the governor vowed.