Victorious Taliban gloat over ruins of CIA’s Afghan base 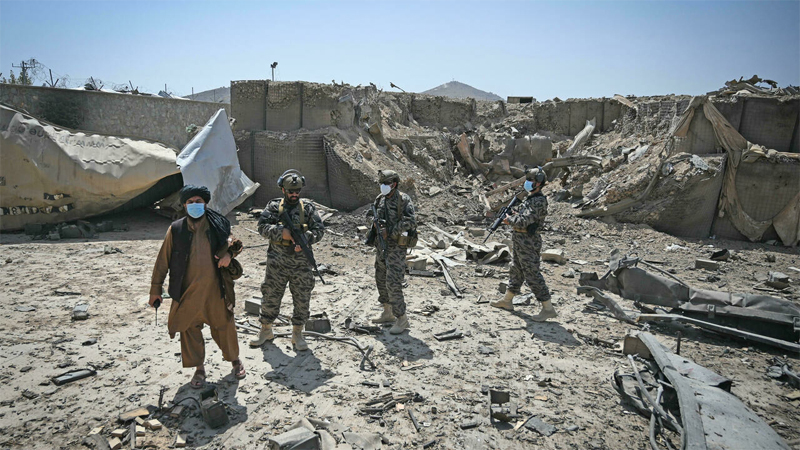 After America’s longest war, Taliban commander Mullah Hasnain contemplates all that is left of what was part of the last CIA base — demolished buildings, destroyed vehicles and piles of ammunition.

“We let them go peacefully, and look what they’ve left behind,” Hasnain said, a leader of the Taliban’s elite Badri 313 unit.

Hasnain, a thick-bearded man dressed in traditional brown robes with a waistcoat and black turban, surveyed the charred ruins of the sprawling complex on the edge of Afghanistan’s capital Kabul.

“Before going, they destroyed everything,” he told journalists being shown the site, flanked by Taliban guards cradling American M-16 rifles and equipped with the latest military kit. The complex was once one of the most secure sites in Afghanistan, sited on a dusty plain near the former US Eagle Base camp and close to Kabul airport. After a two-week blitz of Afghanistan, the Taliban capped their extraordinary victory by sweeping into Kabul on August 15.

It would take two weeks more before the final US forces flew out, ending their 20-year war in the country.

Lots of explosions: As the CIA destroyed their base, from where they trained Afghanistan’s intelligence agencies, the Taliban watched from nearby, the commander said.

“We were there for nine or 10 days,” 35-year-old Hasnain said, speaking in clear English. “There were lots of explosions.”

“We didn’t stop them, even the last convoy that went by road to the airport. We didn’t attack them, because we followed orders from our top officials.”

Hasnain pointed at one crater he said had been “an ammunition warehouse”. Only a heap of rubble and twisted metal remain. The US detonated the munition dump on August 27, with the huge blast echoing across Kabul and sparking terror. A day earlier, Islamic State-Khorasan, Afghanistan’s branch of the jihadist franchise and rivals of the Taliban, had attacked crowds at the airport trying to flee.

They killed more than 100 Afghan civilians and 13 US troops.

Hasnain pointed to another area, where dozens of crates packed with hundreds of rockets were piled. “Please don’t move the grenades,” he told journalists. Piles of unused ammunition lay scattered around. “We can still shoot with them,” he said. One building was left intact, a large games room with billiards, table football, darts and soft velvet armchairs. Its sign still dangled outside — “The Snooker Club”. He looked out over a parking lot, packed with the incinerated wrecks of scores of vehicles.

“We need everything for the country, including weapons — we don’t have enough to ensure security,” he said.

“Now we have to buy them from other countries,” he added, declining to specify which ones.

Deliberate destruction: The US said it left as little military equipment as possible behind for the Taliban, who carried out years of bloody attacks against foreign forces, Afghan troops and the civilian population.

At the nearby airport, US troops disabled or destroyed scores of aircraft and armoured vehicles, as well as a high-tech defence system used to stop rocket attacks. Hasnain was angry at the deliberate destruction, seeing the burned wreckage as symbolic of America’s two-decade stay.

“The US came to Afghanistan saying that they would rebuild the country,” he said. “This is their real face, they didn’t leave anything.” The Taliban nevertheless seized a major arsenal of weapons elsewhere, as well as from the formerly US-backed government army, including fleets of armoured vehicles. Ankle-deep in the ash of the burned base, Hasnain offered a message of conciliation, echoing his Taliban superiors.

“We did not make war to kill Americans,” he said. “We did it to free the country and restore sharia law.” But many in Afghanistan remember the harsh 1996-2001 regime when the Taliban were previously in power all too well. With the hardline Islamists back in charge, they are holding their judgement to see if their pledge of a more moderate rule will become a reality.