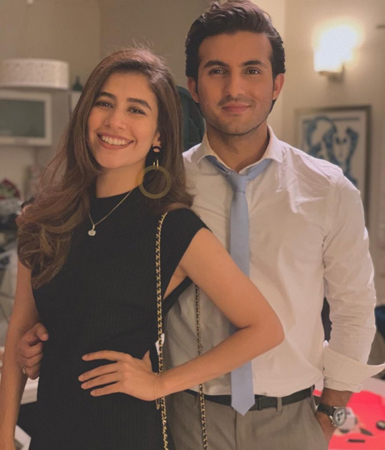 Shehroz Sabzwari has unequivocally credited his ex-wife Syra Yousuf for the good brought up of their seven-year-old daughter Nooreh.

The actor recently appeared on a talk show with his wife Sadaf Kanwal, where the two discussed their relationship with Shehroz’s daughter with ex-wife Syra.

When asked whether Nooreh spends time with her mother after her parent’s separation, Shehroz said, “She lives with Syra. Syra is her mother and maa se hi tarbiyat hoti hai”

It was then pointed out by the host Ahsan Khan that it must be Syra’s good tarbiyat that has helped her relation with her father’s new life and Shehroz was quick to affirm the same.

“Yeh Syra ki hi tarbiyat hai,” he said, adding, “I just enjoy with Nooreh, how can I raise her When she’s a bit older and able to understand me, that’s when a father’s training will be involved. Right now, she even sleeps with her mother, so her daily routine and her brought-up, the whole credit for it goes to Syra!” Shehroz also added that when one meets Nooreh, they will automatically give credit for her to Syra, because “a mother is a mother” and that his job as a father is to spoil Nooreh and that’s what he does right now.

Shehroz’s current wife and Nooreh’s step-mother, model Sadaf Kanwal also shared that she has a great equation with Nooreh, who is the only person allowed to touch her makeup stash! “We have a beautiful relationship, just like friends She calls me Sadaf and I call her Nooreh, Nooro, and many more nicknames!” shared Sadaf. “She is such a beautiful girl, and so loving just like Sherry. She is a second Sherry!” We have to say, we love this healthy family situation between Shehroz, wife Sadaf, ex-wife Syra, and little Nooreh!