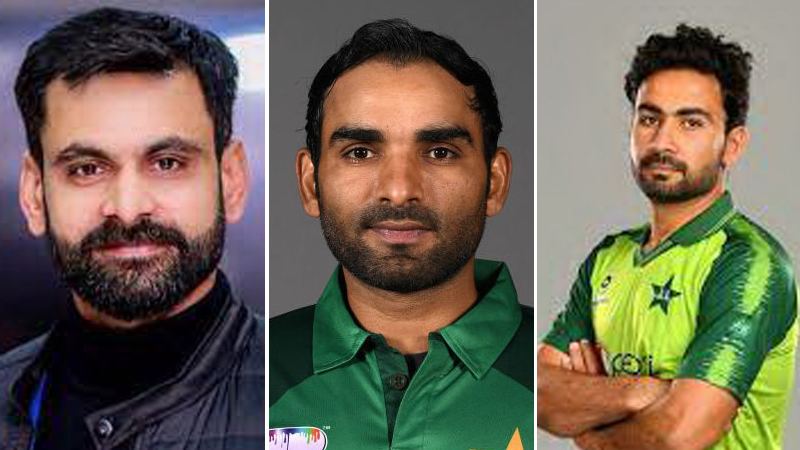 LAHORE: Pakistan selectors, headed by former Test batsman Mohammad Wasim, on Monday included Mohammad Hafeez, Asif Ali and Khushdil Shah in in a 15-member squad named for next month’s Twenty20 World Cup to be held in United Arab Emirates (UAE) and Oman. Both Asif and Khushdil, who had been given a number of chances, had been dropped from the team in April this year, but earned their places back because they are seen as “trusted options’ by the Pakistan Cricket Board (PCB) for the bigger tournaments.Asif shot to prominence as one of Pakistan’s most hard-hitting batters in the circuit, but could never quite display that talent on the international stage. He is currently averaging 16.38 with a strike-rate of 123.74 from 29 T20Is. His domestic T20 career is decorated with a strike-rate of 147.02. Asif is presently playing in the CPL, with 32 runs at a strike-rate of 96.96 from five games.There are also three reserves in Usman Qadir, Shanawaz Dahani and Fakhar Zaman. In a surprise move, experienced campaigners Shoaib Malik, Sarfaraz Ahmed, Sharjeel Khan, Wahab Riaz and Faheem Ahsraf have been overlooked by the selectors for the national outfit. Their exclusion is believed to be in some part due to the influence of incoming PCB chairman Ramiz Raja and his keenness to keep the younger lot in the playing eleven. Babar Azam will skipper the squad. The PCB has till October 15 to make any changes to the selected team.

The selection committee particularly resisted calls to include veteran all-rounder Malik despite the team struggling with middle-order batting for the last two years. Since Misbahul Haq took over as head coach in September 2019, Pakistan have tried 17 different players in the middle order but none of them succeeded. That raised calls for the inclusion of 39-year-old Malik, who played the last of his 116 Twenty20 internationals in June 2020, but chief selector Wasim said specialists were preferred. “We have focused on specialist T20 players and have considered the situation of the venues and our oppositions in the event,” he said at a press conference here yesterday. Pakistan are in Group II alongside arch-rivals India, New Zealand, Afghanistan and two qualifier teams to be decided after the first round. Group I comprises defending champions West Indies, Australia, England, South Africa and two qualifiers.

Pakistan’s T20I assignments will begin on September 25 with a five-match series against New Zealand, in Lahore. This will be followed by two home matches against England in Rawalpindi, on October 13 and 14. Pakistan will then head to the UAE to kickstart their T20 World Cup campaign, with the marquee clash against India in the Super 12 phase, on October 24. The seventh event of the Twenty20 World Cup will be held from October 17 to November 14. Former Pakistan wicketkeeper Moin Khan’s son Azam Khan is part of the squad, with his selection set to raise plenty of eyebrows due to his inexperience at the highest level and an underwhelming batting debut against England when he was out for just one. Regarding Azam, the chief selector said Azam was an aggressive and attacking batter who also kept wickets, a combination that had earned him the selectors’ nod ahead of Sarfaraz.As expected, veteran all-rounder Mohammad Hafeez made the cut despite enduring a lean year with the bat.

Commenting on the team selection, Wasim said that the cricket board had tried to cover all bases by catering for the modern day brand of T20 cricket. “This includes trusting the abilities, skills and experience of the players to perform in a high pressure global tournament in conditions that are familiar to us, as well as looking at the teams we will play in Group-2 matches,” he said. Justifying Asif and Khushdil selection, he said:”Asif and Khushdil may not have impressive numbers against their names but hardly anyone can doubt their tremendous talent and prowess. They are the best in the available pool of middle-order batsmen and we remain confident that they will provide us solutions to our middle-order difficulties through solid performances,” he maintained. He said these two experienced middle-order batters would compliment Babar Azam, Hafeez, Mohammad Rizwan and Sohaib Maqsood, while in Imad Wasim, Mohammad Nawaz and Shadab Khan they had three top quality spinners who were equally good with the bat and outstanding in the field.

The chief selector said Mohammad Wasim Junior had been preferred over Faheem due to his pace and ability to hit big shots. “Wasim will bolster the fast bowling unit, which comprises Haris Rauf, Hasan Ali, Mohammad Hasnain and Shaheen Shah Afridi,” he said. To a question regarding Sohaib Maqsood’s inclusion, he said Sohaib’s ability to bat and perform anywhere in the top-order had given him an edge over Fakhar. He said the home series against New Zealand and England would provide Pakistan one-last opportunity to fine-tune their preparations. “In doing so, we will like to win maximum matches so that we can carry the confidence and winning momentum to Dubai. Our impressive record in the United Arab Emirates, clubbed with the talent we have in our ranks and the well-planned preparations gives me significant confidence that we will perform well in the ICC Men’s T20 World Cup 2021.”

Pakistan’s schedule of T20I matches (all matches to start at 1900 Pakistan time):