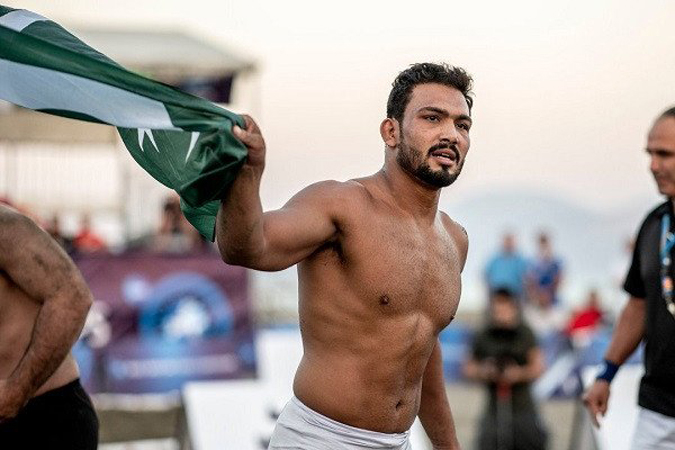 LAHORE: Pakistan’s Inam Butt Saturday won gold medal in the Beach Wrestling World Series in Rome, Italy when he vanquished Ukraine’s OleksiiYakovchuk 3-0 in the final, keeping in supremacy in the 90kg category final. Inam was facing the same opponent he had beaten in his first round encounter on Friday. Inam thanked God for the victory.”Thanks God, I won five fights on the trot and won the world title,” he said. Earlier in the day, Inam had defeated Omer FarukKaradeniz of Turkey 2-1 in the quarter-final. He then prevailed over the Romanian grappler Mihai NicolaePalaghia in the semi-final 3-0 to set the final clash with Oleksii.On Friday Inam defeated world bronze medallistOleksiiYakovchuk of Ukraine in the opening fight before prevailing over Greece’s Georgios Tsaknakis in his second fight.On September 10-11, Greece will host the Beach Wrestling World Series in Katerini, but Inam’s participation has not yet been confirmed. An official of the Pakistan Wrestling Federation (PWF) said Inam had not been granted a Greece visa.

PWF secretary Arshad Sattar confirmed Inam would not feature in the Greece event as he did not get a visa. “We have not got a Greece visa and Inam will not feature in the Greece event. We will write to the United World Wrestling (UWW) to give Inam points for the Greece series as well as for the France series which he missed in July due to visa issues,” he said.”He deserves the points for the missed events. And if given, I am sure Inam will make it to the final of World Series to be held in Romania on September 25-26,” Sattar said.

This is not the first time Inam has done his country proud. He has won laurels for himself and Pakistan in the past, winning gold in the World Beach Wrestling Championships held in Turkey in 2017 and 2018. He won a gold medal in the inaugural World Beach Games in Doha in 2019, in the 2010 Delhi Commonwealth Games and 2018 Gold Coast Commonwealth Games.He also has to his credit gold in the 2016 Vietnam Asian Beach Games, silver in the 2014 Phuket Asian Beach Games and golds in the 2016 and 2019 South Asian Games.