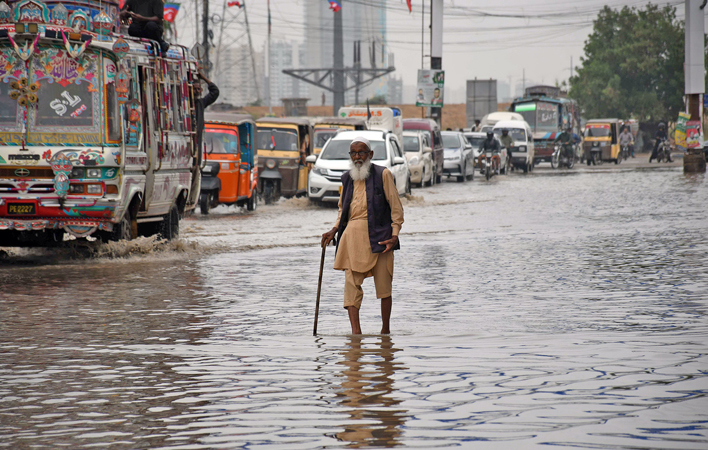 Heavy rain and thunderstorms lashed Karachi for the second consecutive day on Saturday, killing at least three people in different rain-related incidents. The rain also wreaked havoc on the city’s ill-maintained civic infrastructure, fragile transmission and distribution system of the K-Electric (KE), as well as vehicular traffic on major thoroughfares. Around 200 KE feeders tripped out of the total 1,900 suspending power supply to the port city.

The port city continued to receive moderate to heavy showers for a third day under the influence of a monsoon system that is present in the south-southeast of Karachi. Malir, North Nazimabad, Shah Faisal and Liaquatabad were reported to be without power as heavy rain began to fall in the afternoon.

A 50-year old man, identified as Malik Sabir, died of an electric current near Al-Naseer apartments in Liaquatabad on Saturday morning, said a spokesperson of the Edhi Foundation. Similarly, another man, Yaqeen Khan, 42, lost his life when he received an electric current near Abidabad graveyard in Baldia Town in the wee hours of Saturday. In another incident, Asad Iqbal, 34, died of electric shock in Shali Goth near Bagh-i-Korangi on Saturday morning, said a rescue service official.

The maximum rainfall – 66.7 millimetres or 2.62 inches – was recorded in Saadi Town on the day. Roads were submerged by rainwater in almost every part of the city, especially in the low-lying areas where desilting work on major stormwater drains was still incomplete. 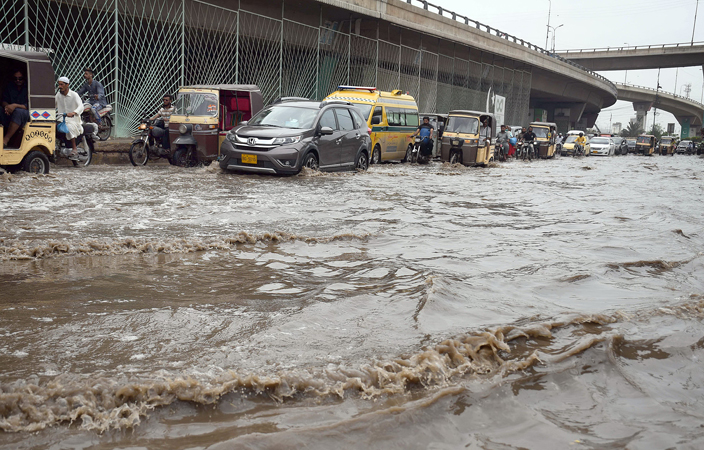 The flow of traffic had started slowing down within the first hour of the downpour in the first half of the day. It turned worse later and took hours to ease up due to multiple reasons, including ongoing development works on some thoroughfares, non-functioning of several traffic signals and the absence of traffic policemen from some intersections.

Long queues of vehicles started forming on main roads mainly due to flooding of different arteries and the Karachi traffic police through its radio services and broadcast media advised the commuters to take alternative routes. In an advisory issued in the evening, the traffic police cited 17 key points in the city where the movement of vehicles was facing issues due to accumulated rainwater on roads.

According to the Met department, there are chances of light showers in the city on Sunday and Monday as well under the influence of a monsoon system. According to the PMD, the Gulshan-e-Hadeed area received the highest amount of rainfall, where around 60 millimetres of rain was reported in last three hours, followed by the Quaidabad where 28.5mm of rain had been reported on Saturday. Meanwhile, 6mm rain was recorded in PAF Base Faisal, 2.2mm at University road, 2mm Old Airport, 2.4mm at Jinnah Terminal, 11mm in North Karachi, 2mm in Surjani Town, 3.5mm at PAF Masroor Base, 2.9mm in Orangi Town, 11.4mm in Nazimabad.