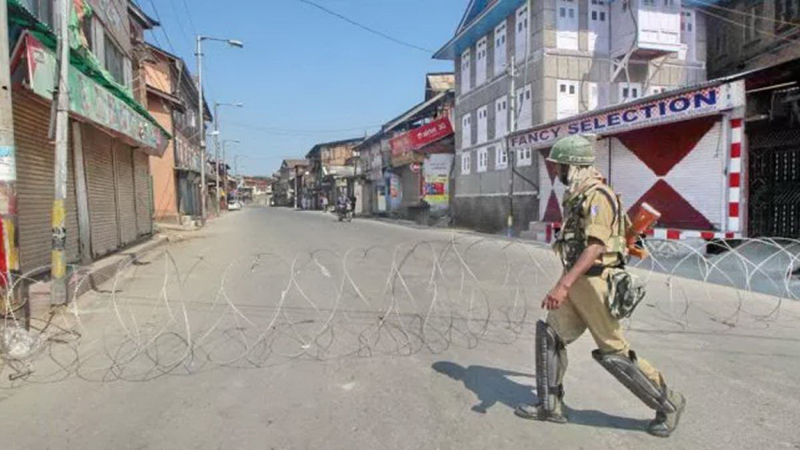 In Indian illegally occupied Jammu and Kashmir, the authorities continue to clamp strict curfew on the third straight day on Saturday to prevent people from conducting a march towards Hyderpora area of Srinagar to pay tributes the veteran Hurriyat leader and icon of Kashmir freedom movement, Syed Ali Gilani.

According to Kashmir Media Service, call for the march has been given by the All Parties Hurriyat Conference as part of its five-day calendar to protest the custodial death of Syed Ali Gilani. The veteran leader, who had been kept under continued house arrest by the occupation authorities since 2010, breathed his last on Wednesday night.

Thousands of Indian troops deployed in every nook and corner of the occupied territory continue to keep millions of Kashmiris confined to their homes. People are not even being allowed to venture out to purchase essential commodities. Mobile internet service also remains suspended to stop people from sharing information about the prevailing situation of the occupied territory.

The APHC in its calendar has asked people to observe complete shutdown in the occupied territory till Tuesday and conduct march towards Hyderpora residence of the veteran leader in Srinagar every day till Sunday. It has urged people to massively converge at Eidgah in Srinagar on Monday to pay tributes to the martyrs. Kashmiris living across the world have been asked to hold protests outside the Indian High Commissions on Tuesday against India’s illegal occupation over Jammu and Kashmir. Meanwhile, the All Parties Hurriyat Conference has expressed gratitude to the people and government of Pakistan for showing solidarity with the people of the occupied territory in offering funeral prayers in absentia across the country for the veteran Hurriyat leader, Syed Ali Gilani.

In a statement, the APHC spokesman also thanked the president of Pakistan and other dignitaries of the state who joined the funeral prayers in absentia held at the Faisal Mosque in Islamabad on Friday for the great leader of Kashmir freedom movement.