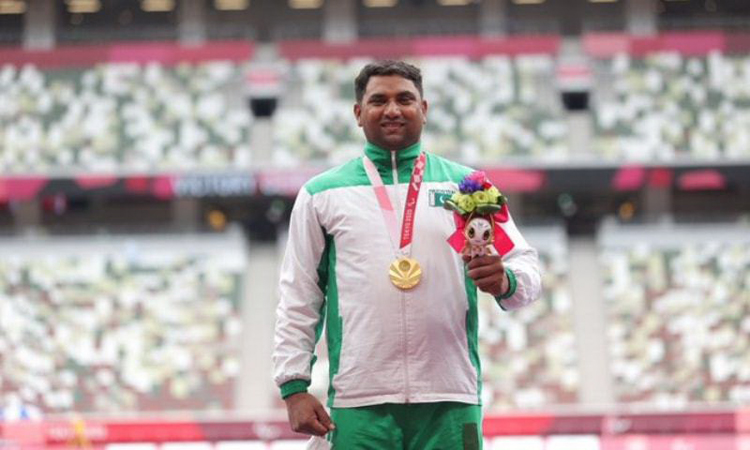 LAHORE: Athlete Haider Ali made history on Friday by winning a gold medal in the discus throw competition at the Tokyo 2020 Paralympics Games, becoming the first Pakistani to do so. Ali achieved a 55.26 metre throw at his fifth attempt out of a total of six to score the best distance – almost 3m longer than Ukraine’s MykolaZhabnyak who scored 52.43m to come in second place. Brazilian Joao Victor Teixeira de Souza Silva won bronze with a throw of 51.86m. The official Paralympics Games accounted posted on Twitter that the attempt was a “personal best” for Ali. Celebrating his win, the athlete said the gold medal would be “very important” for para-sports in Pakistan since others would be able to see what can be achieved through hard work. “I hope to be a role model for other people that have a disability and who don’t compete in sports to take part in para-sports,” he said. The United States Embassy in Islamabad also congratulated him for the win and said he was “used to creating history”. Ali – who hails from Gujranwala – suffers from cerebral palsy. This is not the first time he has won a medal at the Paralympics. However, his previous medals were for long jump. He won a bronze medal at the Rio Paralympic Games in 2016 and a silver medal at the Beijing Paralympic Games in 2008.

He told media before his event: “The training was very disturbed. It was disturbed because the facilities where we can train were closed because of Covid-19 pandemic, and we missed out on the days to train. Those were crucial days. “There were lots of challenges in training, but we kept going because we had to prepare for Tokyo.” Ali feels that having the uncertainty in training was tough, but then the second set of problems arose with having no support from the government of Pakistan in helping the para-athletes travel to Tokyo.

Ali is acutely aware of the fact that Pakistan Government has not played the part that it should have. Ali’s quest has been to assure that the country at least gives equal coverage and support to para-athletes like they give to the Olympians. “My appeal to the Government of Pakistan is that Paralympics is the biggest event in the world, and to even get here and participate here is an honour. I have even won medals for the country. But the request is that the paralympians should get equal support, which the Olympians get, so that we can also train better, compete in a better way, give better results and make Pakistan proud. I am grateful to NPC, because of them I am where I am today.”

Meanwhile, WAPDA Chairman Lt Gen Muzammil Hussain (r) who is also Patron-in-Chief of WAPDA Sports Board, has congratulated WAPDA athlete Haider on winning gold for Pakistan. WAPDA has been patronising sports in Pakistan for more than five decades. WAPDA players have not only been showing their class at the national level but also bringing laurels to Pakistan in international competitions. The Pakistan Olympic Association (POA) has also felicitated Haider for winning gold. “The Olympic Family of Pakistan congratulates MrHaider Ali for securing gold medal in Tokyo 2020 Paralympics Games. MrHaider Ali has demonstrated his resolve to surpass all the challenges to raise the national flag at the Paralympic making history for Pakistan. Mr. Haider Ali, his family and all those who supported him in his athletic endeavours should be praised. In particular, we appreciate the role of WAPDA Sports Board for supporting him in his career as an athlete,” said POA Secretary General Muhammad Khalid Mahmood in a statement on Friday.