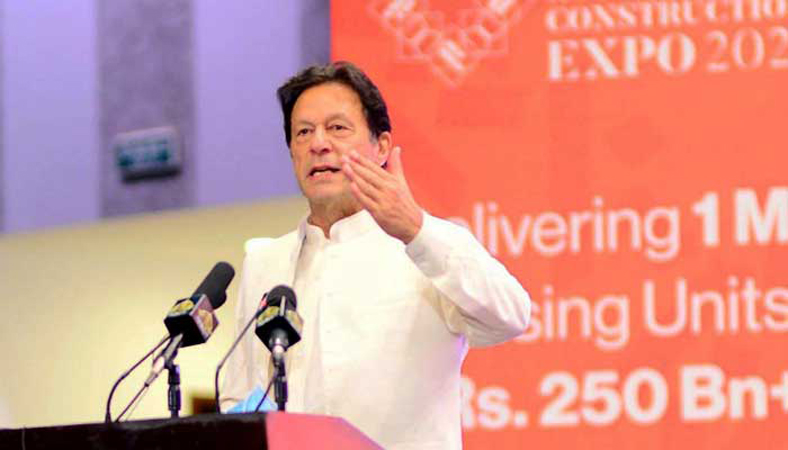 Prime Minister Imran Khan Friday reiterated his government’s resolve to continue facilitating the construction industry in order to create wealth and boost the country’s exports, as he called upon the nation to pay taxes if they wish to see the country prosper.

“You must pay taxes so we can improve the infrastructure and fulfill your basic needs such as education, health, good roads, electricity. People do not do so and then demand facilities, like having done no good deeds and still desiring to go to heaven,” the prime minister said while addressing the inaugural ceremony of three-day ICCI Pakistan Property, Housing and Construction Expo, 2021. “Pay taxes so the wealth of the country can increase,” he stressed.

The prime minister said the government had removed many impediments though some more obstacles were still confronting the construction sector. He urged the business sector to ensure availability of the raw material of construction industry in order to reduce the import bill. He said with introduction of housing finance facility by the government for the low-income group, the country’s 220 million population would become an asset as the construction of houses would positively impact all allied industries.

He said unfortunately, the previous governments never thought of the poor segment but the incumbent government had opened the avenue. Exemplifying China and India, he said the former had steered around 800 million people out of poverty by uplifting the poor while the latter failed to do so as the elite had captured the economy there.

The prime minister said in Pakistan too, the perks and facilities had been limited to a specific class like English-medium schools and private hospitals which consequently compromised the quality of public sector facilities. He told the critics that systemic reformation was in fact the change of mindset requiring a constant struggle.

The prime minister said Finance Minister Shaukat Tarin, who came from the private sector, was cognizant of the problems faced by the construction industry which provided most of the employment opportunities. He said the promotion of construction industry would lead to the wealth creation and revenue generation as well bringing about the export boom.

The prime minister said Singapore’s exports were around $300 billion while Pakistan would hardly touch $30 billion mark this year. Assuring the business sector of all out facilitation, he also urged them to pay taxes enabling the government to spend improving infrastructure like education and health.

Speaking of the government’s efforts to improve the way the construction sector operates, the premier said that in the past, there was no concept of mortgage financing, so there was no question of a government servant being able to construct their own home. “We spent two years getting the foreclosure law passed by the courts, which has now paved the way for banks to provide mortgage financing, meaning financing for houses,” he said. “And then this will mean that our 220 million population will become our asset. It will generate demand, which will lead to more construction and more construction, in turn, will mean a rise in the growth of all associated sectors,” the prime minister added.

The prime minister said that last year, at the height of the coronavirus pandemic, he called the head of the International Monetary Fund and sought concessions for the construction sector. “And the aim was to create opportunities for the common man to earn a livelihood.” “Because when you impose a lockdown, the poor segment of society is the first to get crushed. Due to coronavirus lockdowns, the entire world has witnessed a rise in poverty levels,” he said. He regretted bureaucratic red tape which has prevented a boom in businesses. “Instead of encouraging growth, the bureaucracy starts to think for itself, of how it can make money. It takes time to change such a system,” the premier said, adding that it also required a change in the mindset. “There are still obstacles but we have incentives that were never before seen for the construction industry,” he said.