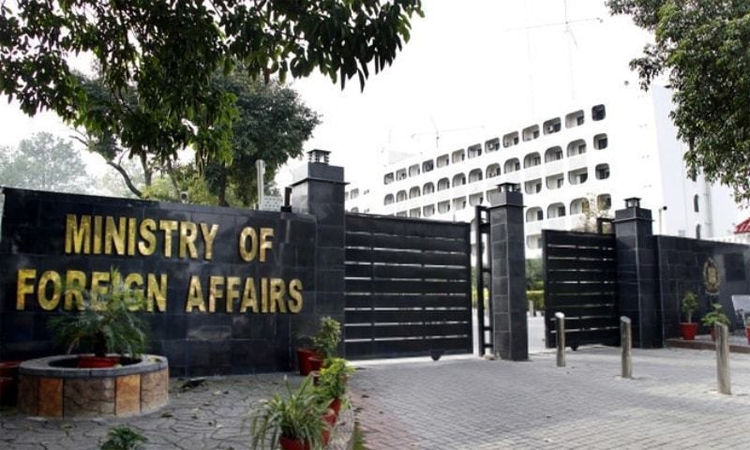 “It was conveyed that the Indian occupation forces’ shameless act of snatching the body of Syed Ali Shah Geelani from his family and disallowing his burial according to his will, was in blatant violation of International Humanitarian Law and all tenets of civil and human rights,” the Foreign Office spokesperson said in a statement. The Indian occupation forces have repeatedly resorted to indiscriminate use of force against Kashmiris protesting against their inhuman conduct.

The spokesperson said in the likely event of the situation spiraling out of control and based on India’s irresponsible behavior in similar situations in the past, there were possibilities of India stage-managing some mischief in the occupied territory to divert world attention and to apportion blame on Pakistan or Kashmiri Hurriyat leadership for its own indefensible actions in the Indian Illegally Occupied Jammu and Kashmir (IIOJK).

It was emphasized to the Cd’A that India must refrain from any missteps that might further jeopardize regional peace. He was reminded of Pakistan’s consistent stance that government of India must immediately lift the illegal military siege in IIOJK. India should also desist from measures to change the demographic structure of the occupied territory, withdraw its over 900,000 occupation troops and cease all human rights violations in the IIOJK forthwith.

Indian Cd’A was conveyed Pakistan’s principled position that lasting and durable peace in the region was contingent on the peaceful resolution of the Jammu and Kashmir dispute in accordance with the relevant UNSC resolutions and the wishes of the Kashmiri people.

Thousands of Indian security forces maintained a lockdown across Kashmir on Friday after the death of a Geelani sparked clashes with protesters. The death of Geelani heightened tensions in the disputed Himalayan territory after authorities refused to let him have a public funeral. An internet and mobile phone shutdown ordered after the icon died late Wednesday continued for the second day. Security forces were deployed around major mosques that remained closed, but special prayers for Geelani were held in a few smaller sites across the Muslim majority region. Thousands of police and troops patrolled the streets to keep people indoors following clashes between residents and government forces in the main city of Srinagar late Thursday. But dozens of citizens, angry at the refusal to let them pay a public tribute to Geelani, clashed with government forces for the second day, hurling stones at paramilitaries who chased them with batons.

Geelani’s son accused police of taking his father’s body away to be buried in the middle of the night, hours after his death. The family said no relatives were allowed at the burial but police rejected the allegations as ‘false propaganda’. A video widely shared on social media showed officers in a scuffle with Geelani’s relatives before taking away his body that was wrapped in a Pakistani flag.

Geelani, who had spent much of the past five decades in jail or under house arrest, had infuriated successive Indian governments with his pro-Pakistan stance and demands for a self-determination vote.

Pakistan observed a day of official mourning for Geelani on Thursday.

Mirwaiz Umar Farooq, Kashmir’s chief cleric and Geelani’s longtime associate, said in a statement that the funeral restrictions were “extremely shameful and exposes the authoritarian mindset of the government.”

International print and electronic media gave prominent coverage to the demise while in Indian custody of Geelani, with a leading American paper calling him an “influential and uncompromising” leader. “Mr Geelani had long argued that the valley should fall under Pakistan’s control because of its geographical and religious affinity with that largely Muslim country,” The New York Times reported. “He (Geelani) said India should remove its troops from Kashmir and hold a long-promised vote over whether Kashmir should be part of India or Pakistan, though he hinted in recent years that he would side with independence if that option were to prevail in a referendum led by the United Nations,” the report said.