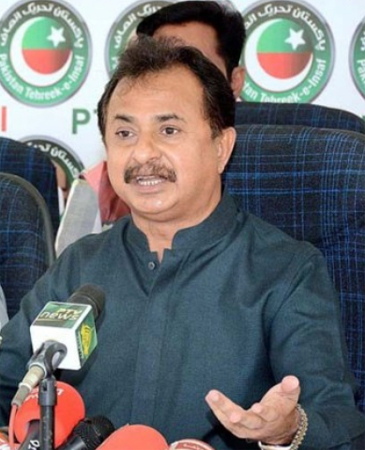 Leader of Opposition in Sindh Assembly Haleem Adil Sheikh Friday accused the Sindh government of adopting dual policy to deal with Covid-19 situation in the province.

The PPP government has segregated Karachi and Hyderabad from rest of the Sindh and citizens particularly trade and industrial community of the two largest cities was suffering from arbitrary and unjustified decisions of the government, he said, while talking to media along with representatives of trade organizations of Karachi.

Karachi Traders Action Committee had set up a camp on M.A Jinnah road and started hunger strike in protest against Sindh government’s COVID related decisions including two day closure of markets and trade activities in a week and limited business hours on weekdays in Karachi.

Haleem Adil Sheikh, along with PTI MPA Raja Azhar and others, visited protest camp to express solidarity with the traders and assured them of PTI’s assistance in the regard. Speaking at the occasion Haleem Adil Sheikh observed that Sindh government have adopted double standards for traders of Karachi who were contributing 70 percent of taxes into total revenue of the country.

It was embarrassing to see the traders on roads instead of running their businesses, Haleem said and added that CM Sindh and his team was unaware of miseries of common men and of problems being faced by traders and industrialists of the province. He censured Sindh government for anti-Karachi, anti-business and anti-people decisions and actions and stressed on CM Murad Ali Shah to consider traders’ demands and revisit such decision which could ransack the national economy. PPP was arranging public gatherings, rallies and other political activities in violation of coronavirus SOPs but at the same time they were against opening of businesses and schools, Haleem Adil Sheikh observed.

Karachi Police could only be seen active at the time set for closing markets while it was failed in disposing of their basic duty, maintenance of peace and order in the metropolis, he alleged adding that 363 drug dens were operating in the city in connivance with the police officers.

Bilawal Zardari and Murad Ali Shah had turned their eyes from issues of traders and daily wage earners and were busy in minting money through illegal means, he further alleged.

Haleem Adil Sheikh said that Prime Minister Imran Khan was against the policy of closing business and PTI government taken such measures that ensured prevention of diseases and continuity of economic activities at the same time.

Revenue generation was pivotal to meet the public expenditure and provision of basic facilities to masses and it was not possible without allowing businesses to run, he stated and urged Sindh government to accept the demands of traders.

“PTI will table a resolution in Sindh Assembly in support of traders’ demands while a letter in the regard would also be written to Chief Secretary Sindh”, Haleem said adding that PTI Sindh would wholeheartedly support the struggle of traders and would be standing shoulder by shoulder to them. He said that PTI lawmakers would regularly attend the protest camp and if traders decide to march towards the CM House they would found PTI legislators and workers in forefront.

Trader representatives Rizwan Irfan, Sharjeel Goplani and Jamil Piracha, while speaking at the occasion, thanked Haleem Adil Sheikh for extending support to traders and said that Sindh government’s decision would negatively affect the trade and business and push thousands of people into financial hardship. Due to coercive and arbitrary policies of PPP government a number of traders and industrialists were shifting their business from Karachi to other provinces, they said and appealed the federal government to take immediate action to save the national economy from further damages. They also demanded to impose Governor rule in Sindh as PPP government had completely failed to deliver and bad governance was at its peak in the province.