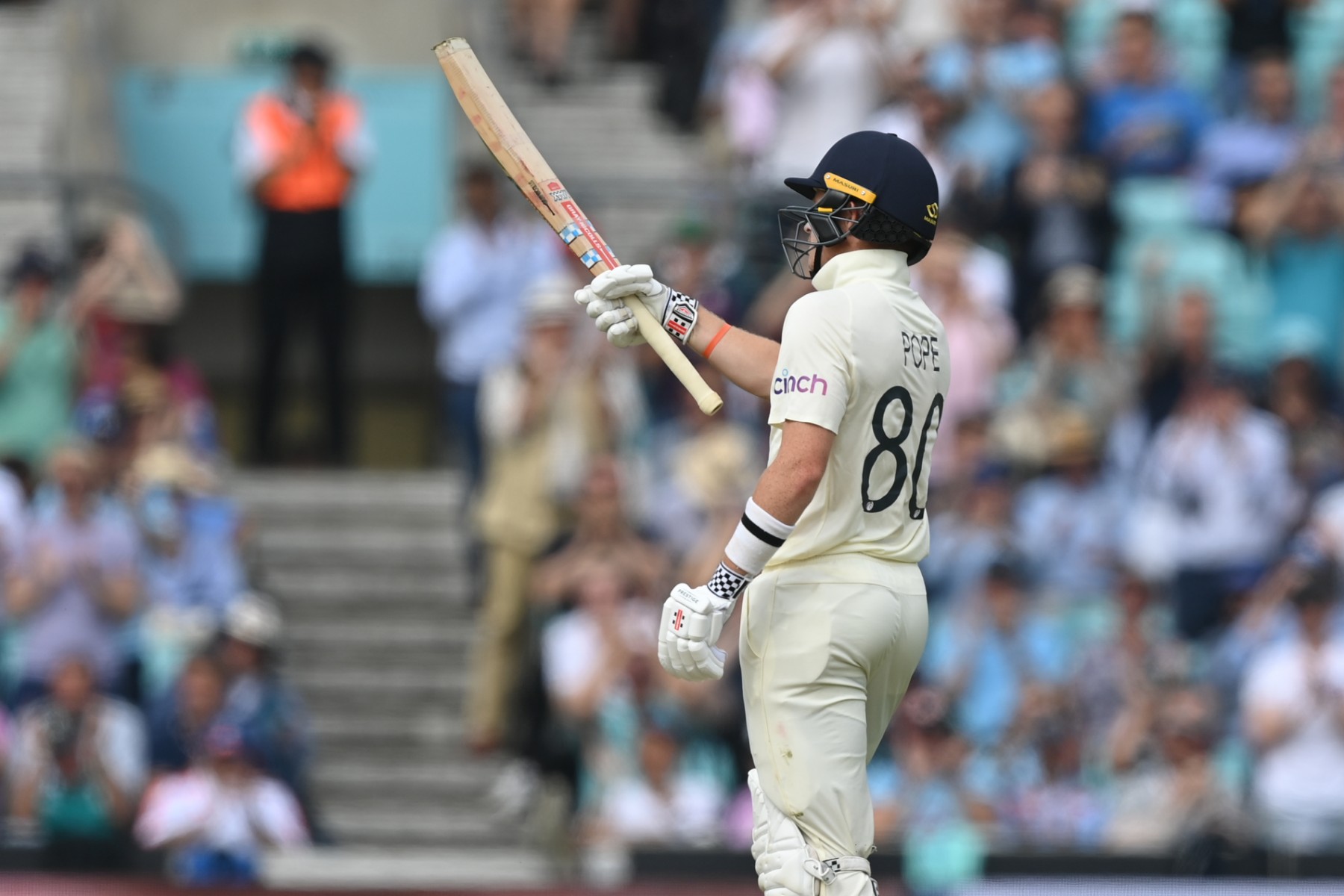 Ollie Pope and Jonny Bairstow rescued England from a top-order collapse against India with an unbroken stand of 77 in the fourth Test at the Oval on Friday.

They came together when England were in deep trouble at 62-5 but at lunch on the second day the pair had moved the total on to 139-5 — just 52 runs adrift of India’s first-innings 191.

The recalled Pope, on his Surrey home ground, was 38 not out and Bairstow 34 not out.

The hosts resumed on 53-3 after fit-again India all-rounder Shardul Thakur had struck a 31-ball fifty — the fastest in terms of balls faced in a Test in England.

That helped get the visitors near 200 after they had collapsed to 127-7, with paceman Chris Woakes taking 4-55 in his first Test in more than a year.

England needed a significant innings from someone other than captain Joe Root after the world’s top-ranked Test batsman, who has made three hundreds already this series, had been bowled by Yadav for 21 on Thursday.

It was not long, however before Yadav, brought back with Thakur after India dropped fellow pacemen Ishant Sharma and Mohammed Shami, reduced England to 62-5.

Nightwatchman Craig Overton fell without adding to his overnight score of one when a flashing square cut was caught by India captain Virat Kohli at first slip.

Dawid Malan, fresh from his 70 on England recall in an innings win at Headingley last week, had added just five runs when the left-hander, squared up by Yadav, was well caught by a diving Rohit Sharma at second slip.

Bairstow had a nervous moment when, still on nought, India reviewed a not out lbw decision only for replays to indicate the ball would have missed leg stump.

He got off the mark when he drove an over-pitched Yadav ball through the vacant mid-off region for four.

Pope, recalled after wicketkeeper-batsman Jos Buttler missed this match to attend the birth of his second child, has a superb record at the Oval.

After a skittish start he hit three fours in four balls off Thakur — a classic on-drive followed by a clip through mid-on before a short delivery was pulled resoundingly through midwicket.

The runs were flowing during a spell of seven boundaries in two overs, with Bairstow hitting three successive Mohammed Siraj deliveries to the rope — the best a cracking square-cut through point.

Bairstow brought up a fifty partnership when he drove a half-volley from Yadav through long-on, with the bowler’s figures suffering en route to a lunch analysis of 3-49 in 13 overs.

Kohli, in the ongoing absence of star off-spinner Ravichandran Ashwin, yet to be selected this series, brought on slow left-armer Ravindra Jadeja in a bid to break the partnership.

But for all the Oval pitch is known to assist spinners late in a game, a second-day surface gave Jadeja little help.

The teams are locked at 1-1 in the five-match series after a win apiece.