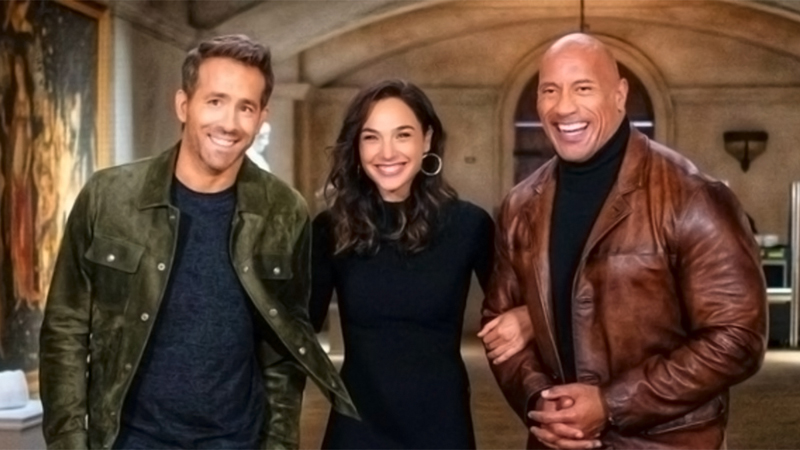 The trailer of Red Notice, starring Dwayne Johnson, Gal Gadot and Ryan Reynolds, is out, and it looks like an action romp.

Here, Johnson plays an FBI agent who is given the task of arresting Gal Gadot’s ‘The Bishop’. To make the arrest, he needs to partner up with Ryan Reynolds’ Nolan Booth.

The trailer suggests that this will be a cat and mouse game that will take these three characters all over the world. The video also gives a peek at some exquisite action sequences.

Red Notice has been directed by Rawson Marshall Thurber. He has previously helmed Skyscraper, Central Intelligence and We’re the Millers.

The film’s official synopsis reads, “When an Interpol-issued Red Notice – the highest level warrant to hunt and capture the world’s most wanted- goes out, the FBI’s top profiler John Hartley is on the case. His global pursuit finds him smack dab in the middle of a daring heist where he’s forced to partner with the world’s greatest art thief Nolan Booth in order to catch the world’s most wanted art thief, ‘The Bishop’. The high-flying adventure that ensues takes the trio around the world, across the dance floor, trapped in a secluded prison, into the jungle and, worst of all for them, constantly into each other’s company.”

Red Notice was shot in the middle of the pandemic with strict Covid-19 protocols. At the wrap of the film, Dwayne Johnson shared a video where he was seen addressing the crew with an emotional speech. “I have wrapped many big productions in my career, but none will ever compare to wrapping RED NOTICE and what this represents. The gratitude, the emotion and the galvanized spirit of this crew – whom I consider my family – who locked arms with us and went shoulder to shoulder to sacrifice their time with their families, battle thru extreme COVID conditions, to proudly and tirelessly be the hardest workers in the room who will always. GET THE JOB DONE.”