* Womansplaining — Navigating Activism, Politics & Modernity in Pakistan is edited by the iconic Sherry Rehman and is published by the Jinnah Institute 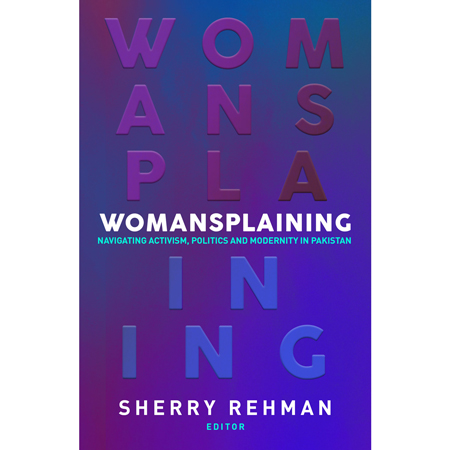 The iconic Sherry Rehman, who needs no introduction, has edited an inspirational book of essays contributed by 22 Pakistani women from all walks of life.

The book titled Womansplaining – Navigating Activism, Politics & Modernity in Pakistan was released in March this year and has so far been reviewed by prominent personalities who hold mastery in their craft such as Kamila Shamsie, Malala Yousafzai, Hillary Clinton and Christina Lamb, all who sing praises for the exceptional messages the book aims to put forth.

A country like Pakistan where the climate of women being silenced and their wings being clipped, their hands being tied is common, needed Womansplaining where incredible voices from 22 inspirational women are mentioned.

Academy Award winning filmmaker Sharmeen Obaid-Chinoy shared the news of the release of the book on Instagram where she wrote, “It is more important now than ever to amplify the voices of all those women who are working across Pakistan.” She called the book “an anthology that is a must read for academics, school and college students and it makes a compelling case about the state of women in this country.” Chinoy went on to thank Rehman for, “bringing these incredible voices together to create something that will outlive all of us.”

This anthology of essays attempts to provide testament and context to women’s activism through their experiences and gave it intellectual meaning and moral quest.

Without forcing a grand narrative on the essays, a selection of younger writers use this space to grapple with persistent barriers reified by the state, while speaking to new problems that tag on to new opportunities. These young women seek to add their voices to the changing face of women’s activism in contemporary Pakistan, while building a new vocabulary to address emerging challenges.

“As the name suggests, Womansplaining is about courageous Pakistani women that have dared to speak out and fight for what is rightfully theirs. It is, in some ways, as much a preservation of an alternative history of Pakistan, as it is a preservation of the oral history of women. It brings into public consciousness the struggle of women who fought for independence in 1947 and then fought equally hard to secure their rights in an independent Pakistan. Each story and struggle is narrated by the powerful voice of its author who brings to light her experience, struggle and discourse with Pakistani society during the last seven decades. In her foreword to the book, Sherry Rehman highlights the ideological and political nuances of the women’s movement, remembering all those women who are no longer with us or were unable to contribute to this seminal work. Essays by stalwarts such as Hina Jilani, Khawar Mumtaz, Afia Shehrbano Zia and others narrate the history of the Muslim Family Law Ordinance, Women’s Action Forum and various legislative changes in Pakistan’s history. Bina Shah and Fifi Haroon talk eloquently about feminism and the arts, Nighat Dad talks about feminism in the digital age. Each essay is fresh and consuming. The book’s ability to bring together women from different generations allows for a much-needed dialogue within the women’s movement today. New age feminists and those that struggled against the dictatorial legislation of the Zia years converse with each other through their essays, shining light on the ideas, vocabulary and different pathways that women have chosen to fight for their empowerment. Sherry Rehman in her essay on women and politics answers the difficult question of what, if anything, women politicians have been able to achieve in Pakistan,” Jinnah Institute’s former director Hassan Akbar writes in his review.

A country like Pakistan where the climate of women being silenced and their wings being clipped, their hands being tied is common, needed Womansplaining where incredible voices from 22 inspirational women are mentioned

“This remarkable collection of essays was put together by one of Pakistan’s most distinguished and talented women, who is a fourth-term parliamentarian, diplomat and civil-society activist, having served as the Leader of opposition in the Senate; Pakistan’s Ambassador to the United States and federal Minister for Information & Broadcasting. She is currently the Parliamentary Leader of the Pakistan People’s Party in the Senate, as well as the architect of several of Pakistan’s rights laws and has received Pakistan’s highest civil award, the Nishan-e-Imtiaz. Rehman highlights the Aurat March, an annual demonstration organised in various cities of Pakistan including Lahore, Hyderabad, Sukkur, Karachi, Islamabad and Peshawar, to observe International Women’s Day. An especially noteworthy in the book is Contesting the Class Question: Moving beyond Piety & Patriarchy by Afiya Shehrbano Zia. As Rehman notes, the term ‘womansplaining’ might attract its share of detractors, but that is exactly why the essays here are so pertinent.

The time has come for the men of Pakistan to set aside their egos and listen to the women who know best the measures required to ensure their rights,” Khaled Ahmed writes in his review of the book.