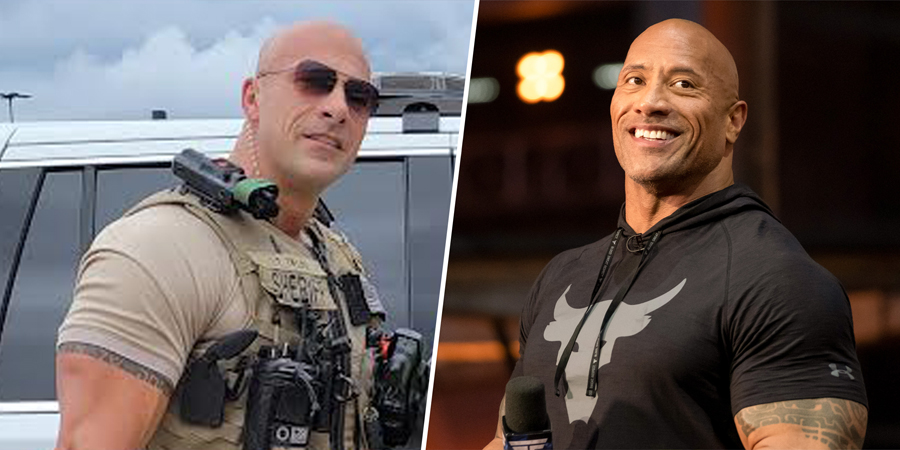 Dwayne “The Rock” Johnson wants his fans to know they aren’t the only ones seeing double.

After images of Patrol Lieutenant Eric Fields from Morgan County, Ala. went viral in recent weeks due to his stunning likeness to the 49-year-old Jungle Cruise star, Dwayne took to Twitter on Monday, Aug. 30 to offer his hilarious response. Dwayne retweeted a Bleacher Report post that paired a photo of Eric on the left to one of Dwayne on the right.

“Oh s–t! Wow,” the actor wrote. He quipped about Eric, “Guy on the left is way cooler.”

Earlier this month, Eric chatted with Advance Local and quipped that he’s been ‘called The Rock and Vin Diesel’s love child’

Dwayne continued by giving a shout-out to his own popular tequila brand. “Stay safe brother and thank you for your service,” he added. “One day we’ll drink @Teremana and I need to hear all your ‘Rock stories’ because I KNOW you got ’em #ericfields.”

Earlier this month, Eric chatted with Advance Local and quipped that he’s been “called The Rock and Vin Diesel’s love child.” The 37-year-old officer explained that he finds the comparisons “humorous” and “flattering,” but admitted the similarities bring a certain amount of pressure. “I don’t want to disappoint anybody,” Eric shared. “I walk up one day and at a different angle, I don’t know. It’s flattering, but it’s also a little nerve-racking as far as what others expect.”

Eric’s likeness to the film star gained attention after a local TikToker posted photos of the officer. “People swear up and down it’s him,” the TikTok user shared. “This is insane… You cannot tell me that is not Mr. Dwayne.”