* 'The first thing I want everyone to know is that my mom doesn't make me do anything,' Piper told TMZ 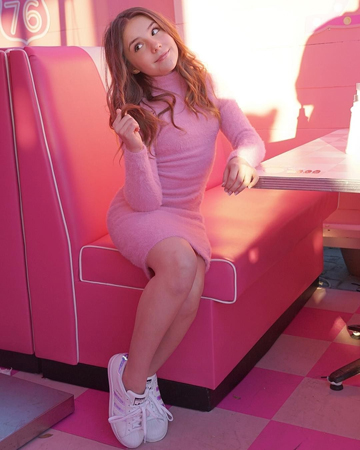 The 14-year-old influencer-who has more than 8 million subscribers on her YouTube channel alone-is responding to Pink’s recent suggestion that she may being “exploited” by her parents.

“The first thing I want everyone to know is that my mom doesn’t make me do anything,” Piper told TMZ. “Quite the opposite, I’m a kid who had a dream and my mom is amazing enough to help me live it out.”

On Sunday, the Grammy winner and mom of two voiced her concern for teen stars-specifically, their images on social media-and named Piper as an example in her Tweet, writing, “How many kids like Piper Rockelle are being exploited by their parents? And at what point do the rest of us say, ‘this isn’t okay for a 13 yr old to be posing in a bikini whilst her MOTHER takes the photo?!?!'”

Piper, whose channel hosts a slew of prank videos and trending challenges, has also amassed a major following on Instagram, with 5 million followers and counting on the social media platform.

And although she’s become a popular YouTuber, the teenager also told TMZ that she doesn’t think Pink has watched any of her viral videos.

On Sunday, the Grammy winner and mom of two voiced her concern for teen stars, specifically, their images on social media and named Piper as an example in her Tweet, writing, ‘How many kids like Piper Rockelle are being exploited by their parents?’

“I don’t think Pink has ever seen one of my YouTube videos because if she did she’d see it’s just my friends and me having fun and acting like ourselves,” she told the outlet. “The content we make is the kind of stuff anyone can watch.”

Referring to the singer’s comment about her latest post of herself in a two-piece bikini, Piper also told Today Parents, “There’s nothing wrong with being in a bikini. Why do we shame people for that? Pictures of teenagers in bikinis having fun are not sexual. They’re only sexual if you view us that way.” Piper’s mom, Tiffany Rockelle, also spoke to Today Parents and stated that she’s only supporting her daughter’s aspirations. “Since Piper was a child, she has had a strong love of performing and she has always had a dream,” Tiffany said. “So long as Piper wants to do this and it’s her passion, I’m here for her to follow that dream and protect her.”

When it comes to being in control of her career, Piper also told TMZ, “I know there are kids who are being taken advantage of and that’s a real problem, but I’m not one of them.”

E! News has reached out to Pink’s reps for comment.