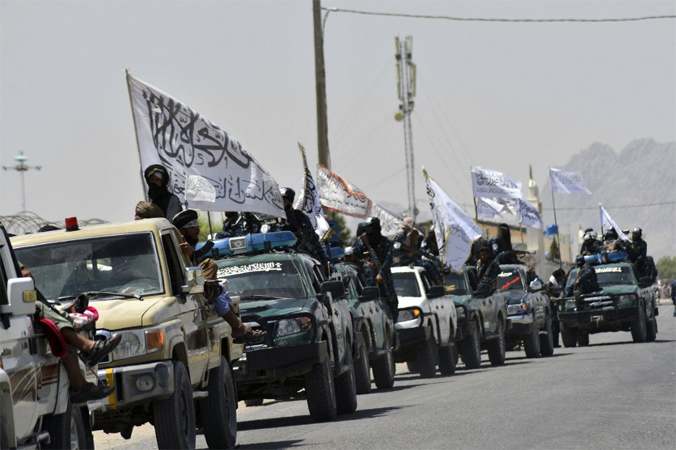 A Black Hawk helicopter flew circles over the Taliban’s spiritual heartland in southern Afghanistan Wednesday while below fighters stood aboard captured Humvees as the Islamists paraded their plundered US military hardware.

The Taliban’s victory lap, celebrating the final withdrawal of US troops, follows the group’s astonishing two-week takeover that capped a simmering 20-year insurgency. On the highway towards Afghanistan’s second-biggest city of Kandahar, a long line of green armoured fighting vehicles drove in single file down, most with white-and-black Taliban flags attached to aerials. Fighters manned the controls of the multi-purpose trucks — used by US, NATO and Afghan forces during the two-decade war — while others clambered over the vehicles at Ayno Maina, a town on the outskirts of the city.

Among the light weapons cradled by the militants were American M16 rifles.

Pick-up trucks laden with supporters rolled past the convoy of military vehicles, some armed with heavy weapons and machine guns. At least one Black Hawk helicopter buzzed overhead, suggesting someone from the former Afghan army was at the controls as the Taliban lack qualified pilots. An ethnic Pashtun heartland, Kandahar is the birthplace of the Taliban and where the hardline group rose to power in 1996. By 2001, when US-led forces invaded, the Taliban had seized control of most of the country. At Kandahar Cricket Ground, hundreds gathered to listen to speeches heaping praise on the Taliban following their successful offensive last month and pouring scorn on the United States. Elder leaders sat in the shade in the players’ dugout, reclining on armchairs behind wooden coffee tables. Others sat crossed-legged on the grass, while many more gathered in the terrace stands to watch. Armed fighters in camouflage fatigues stood in front of the crowds.

“Our common enemy who vowed to bring economic prosperity to our land failed to do so,” a Taliban recruiter named Saqeb said.