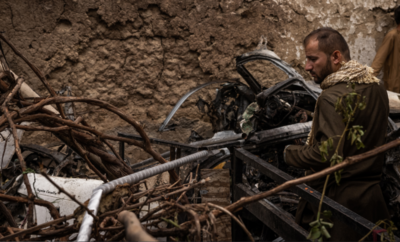 On Sunday evening, Ezmarai Ahmadi as usual returned home from work in Kabul, a large family was there to say hello to him including his sons, daughters, nieces and nephews. Aimal Ahmadi, his brother, said Ezmarai hauled his white sedan into the driveway of a modest house in Kwaja Burga. He then called his eldest son handing him the keys he asked him to park the vehicle.

Youngsters heaped up into the vehicle — pretending the parking routine was an adventure — while Ezmarai noticing from the side, his brother told AFP.

Then, according to Aimal, to their misfortune, a missile came squealing down — hitting the car with a terrible force and 10 people became its hapless victims instantly.

The United States has taken responsibility for the attack and said it had destroyed an explosive-laden vehicle in an airstrike. on the other, on Monday, Aimal in severe pain said he had lost 10 members of his family in the strike, including his daughter and five other children.

While describing the situation, he crestfallenly said, “The rocket came and hit the car full of kids inside our house. It killed all of them.” Adding that; “My brother and his four children were killed. I lost my small daughter… nephews and nieces.”

When an AFP journalist visited the scene on Monday, Aimal was eagerly waiting for other relatives to make an appearance to help him organise burials for most of his family. However, AFP was failed to independently verify Aimal’s account.

“We are aware of reports of civilian casualties following our strike on a vehicle in Kabul,” Captain Bill Urban, a US military spokesman, said in a statement.

According to the reports, The United States air struck in response to the IS suicide bomber which triggered a massive blast, killing 100 Afghans and 13 US service members, at an entrance to Kabul airport last week, as huge crowds yelled to get inside for the final evacuation.

Against that backdrop, US intelligence had threatened another great attack, and on Sunday the US military said it had stopped one before it happened.

“We are still assessing the results of this strike, which we know disrupted an imminent ISIS-K threat to the airport,” Urban said Sunday, using an acronym for the Afghan branch of IS, adding that, “We know that there were substantial and powerful subsequent explosions resulting from the destruction of the vehicle, indicating a large amount of explosive material inside that may have caused additional casualties.”

When inquired about the claims of civilian causalities, Pentagon spokesman John Kirby said: “We are not in a position to dispute it”.

He vowed the United States would be “transparent” if the investigation showed civilians were killed; while defending the military’s efforts to avoid loss of life.

Aimal said he cannot believe his brother could be mistaken for an Islamic State group sympathizer, let alone an operative planning a deadly car bomb attack. Ezmarai, his brother said, was an engineer working with a non-governmental organisation.