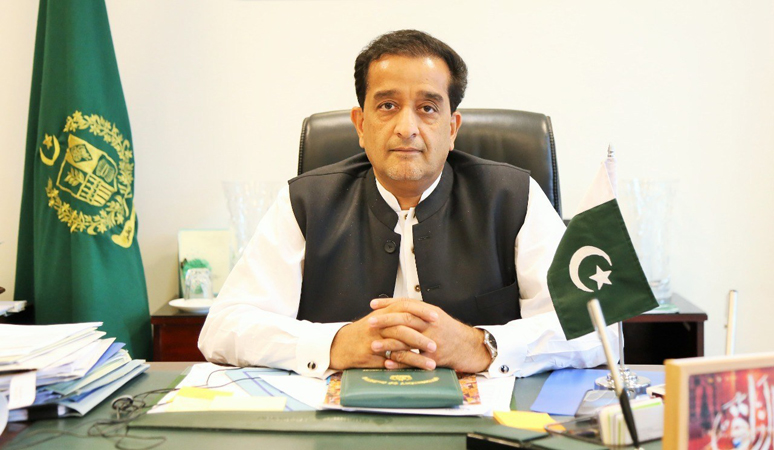 Amin said it was the highest forum level appreciation for Pakistan to successfully host WED 2021 celebrations and acknowledgment of Prime Minister Imran Khan’s Clean Green agenda which was practically enforced on ground.

The UNEP head, he said, wrote a letter to Prime Minister Imran Khan and defined the success of his green agenda, adding, “She wrote that Pakistan WED live telecast was watched by over 170 million people all over the world, and 42,000 articles were published so far on WED celebrations in 37 languages around 174 countries.”

Amin added that Ms Anderson underscored in her letter that over 160 million people had watched and participated in the social media trends and hashtags of #WorldEnvironmentDay whereas the UNEP webpage was live streamed by 1.5 mln masses.

“Ms Inger Anderson has called the WED 2021 hosted by Pakistan as the most successful celebration ever made,” he added saying it was held under strict Covid-19 protocols.
The SAPM mentioned that Pakistan’s clean green vision was very clear with on ground efforts for ecosystem restoration. Amin Aslam opened up his presser with the English saying, “When you invest in nature you are doing God’s work.”

After three years of Pakistan Tehreek-e-Insaf (PTI) government, the entire country was leading green vision of Prime Minister Imran Khan, first implemented in the form of Billion Trees’ Plantation in Khyber Pakhtunkhwa that generated some 5,00,000 jobs, he said.

He announced that the first 1.5 billion trees target under Ten Billion Tree Tsunami Plantation Project (TBTTP) to be achieved by end 2021. “Our government have augmented existing national parks from 30 to 45 with 15 new national parks launched during Covid-19 lockdown under Protected Areas Initiative,” he added.

The SAPM said US $ 120mln were received for Green Stimulus launched by the Prime Minister to support Covid-idled masses through daily-waged employment in plantation and ecosystem restoration endeavours. “The funding will be used from October this year with all provinces on board. It includes massive and innovative plantation projects particularly billion tree olives, billion tree honey, mangroves plantation and Electric Vehicles induction under the Policy is also part of it,” he underlined.

Amin said a target to generate some 200,000 jobs was set to be achieved under the Green Stimulus, adding, “We are initiating the stimulus with complete planning and mechanism.” Amin highlighted that tree plantation was also the advice of the Prophet (SAW) and his sunnah as trees pray for the one who grew and protected them.

“Trees have become identity of Pakistan and Prime Minister Imran Khan’s name attached to it as the country’s name is reckoned with TBTTP,” he said proudly. Pakistan, he said, was getting green diplomacy assistance through TBTTP as Kingdom of Saudi Arabia (KSA) ties improved through it.

A Memorandum of Understanding was signed between the two brotherly countries that would generate jobs in Pakistan, he added. The SAPM informed that it would be launched in October this year, where the Prime Minister was invited by KSA’s Crown Prince Mohammad Bin Salman for an official visit.“Pakistan will be a key player in this green collaboration,” he noted.

He also informed about a joint working group being set up with the United States administration after his recent meeting with US Special Presidential Envoy for Climate, Senator John Kerry to promote green collaboration and termed his interaction with Senator Kerry as positive.

“We will spend more energy, passion and innovation to promote our vision. But the opposition is not accepting it. They should shun their prejudice and play their part in plantation which was already acclaimed globally. It’s a key symbol of rising Pakistan,” he commented.

Responding to media queries, Amin Aslam said women’s share in KP’s plantation drive was promising which would also incorporate during the KSA green collaboration in Pakistani component. “We have three green bonds for garnering green climate finance under a novel approach,” Amin said.

“It comprises of green bond on renewable energy hydro power projects. A US $ 500 million instrument has been launched by WAPDA that had six times more demanded in the market,” he said. A Blue Bond would be launched soon which was based on mangroves and sea marsh carbon evaluation done through World Bank and has some US $ two billion worth carbon absorbed into it, he informed.

The Nature Bond which was totally unique effort made by Pakistan would help get debt rebates through investment in conservation of ecology and environment with the participation of UK, Germany and Canada, the minister said. Replying to various other queries, he said a proper plan was made to vibrantly participate in COP-26, Glasgow.