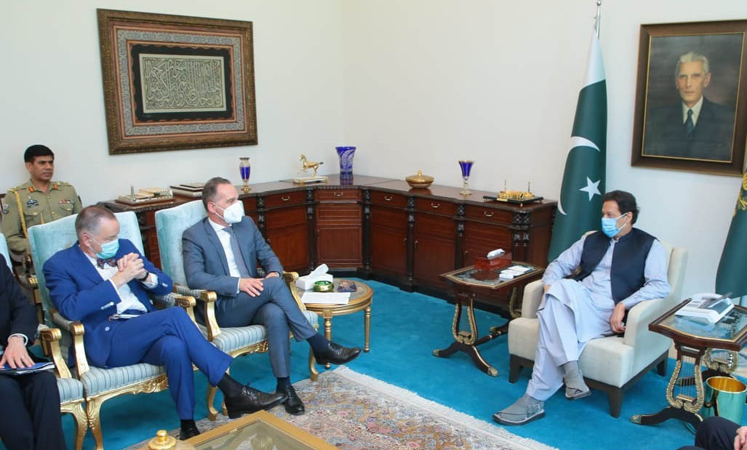 Prime Minister Imran Khan on Tuesday underscored that a peaceful and stable Afghanistan was vitally important for Pakistan and the region.

He stressed that at this pivotal moment in Afghanistan’s history, it was important for the international community to remain in support and solidarity with the Afghan people.

The Prime Minister was talking to German Foreign Minister Heiko Maas, who called on him here.

During the meeting views were exchanged on the situation in Afghanistan and Pakistan-Germany bilateral relations.

The Prime Minister recalled his conversation with Chancellor Merkel, in which the two leaders had fruitful exchange of views on Afghanistan situation.

He underlined that urgent steps were needed to stabilize the security situation, address humanitarian needs, and ensure economic stability in Afghanistan. These would require sustained engagement with Afghanistan, he added.

The Prime Minister underscored that both Pakistan and Germany should work closely for the promotion of shared interests relating to regional peace and stability.

Foreign Minister Heiko Maas conveyed cordial greetings of Chancellor Merkel. While sharing Germany’s viewpoint on the evolving situation in Afghanistan, he thanked Pakistan for its support and facilitation for Germany’s evacuation endeavours from Afghanistan. Foreign Minister Maas also highlighted the celebration of 70th anniversary of the establishment of Pakistan-Germany diplomatic relations during 2021.

The two countries are holding a series of events to celebrate this milestone in a befitting manner.

He stated this during a meeting with Minister for Food Security Fakhar Imam who briefed him about the expected increase in the production of crops of rice, sugarcane, corn and cotton. The prime minister said the government was ensuring implementation of agriculture transformation plan to modernize the sector. He was also informed about the reforms brought by the ministry in the sectors of livestock and fisheries. The prime minister was told that improvements were being introduced in the reproduction of livestock, supply of food and provision of health facilities. Separetly, PM Khan held a meeting with Minister for Civil Aviation Ghulam Sarwar Khan and received a briefing about the outsourcing of airports and operation and regulatory role of Civil Aviation Authority. Ghulam Sarwar told the prime minister that the construction of 500 flats in Labour Complex Taxila were completed. Seventy flats in this complex were allocated for the martyrs of Ordnance Factory Wah, he said, adding balloting of these flats would be held soon.

Meanwhile, Dr Ishrat Hussain paid a farewell call on the prime minister and presented him a performance report on institutional reforms.

The two-volume report not only included the introduced reforms but also a detailed future strategy in that regard.

The premier lauded the services of Dr Hussain and expressed best wishes for his future.