America being a military superpower failed to win the Afghanistan war as there were fundamental strategic problems that resulted in the present circumstances. The US was sure of winning the 20 years long war but smoothly taking over most of the Afghan soil and falling of quick Afghan government by the Taliban was not expected. There was a huge criticism seen on President Joe Biden’s decision on the end of military presence and withdrawal of logistics.

Afghanistan has a great history of empires where Great Britain and the Soviet Union have fallen. Taliban have firm faith in Allah and their unshakable emaan led to this victory. The criticism of the US’s decision is valid as the decision was stemmed from the approach of military seizuring of international territory to fight extremist ideologies and movements that were wrong. The political dialogue was considered by most leaders more effective in the place of using military force. Initially, it was seen that the US’s intervention in Iraq and Afghanistan was justified to control and eliminate the serious national security threats of weapons of mass destruction and Al-Qaeda. But with time, after fulfilling the initial desired aim, it was changed into a long-term approach for preventing future threats from these countries. It was planned to provide security and stability to both nations in establishing the governments in their respective countries.

This approach was also criticised by the Centre for Complex Operation at the US military’s National Defense University (2009) in their assessment report. The assessment says that military intervention in Iraq and Afghanistan was focusing on future war as the military is not trained with respect to the development of civilian-centered tasks such as the formation of political institutions, democratic practices, promotion of stability in a country, etc. The military intervention is seen in places such as Somalia, Lebanon, Iraq, etc. showing building a lack of popular legitimacy where leaders were seen dependent on the foreign military for the maintenance of power.

The US narrative, despite military superiority, failed to uproot Taliban’s ideology and Islamic teachings.

Regarding Afghanistan, the causes that led to the US’s failure are:

(1) Short term approach of elimination of Al-Qaeda was changed into a long-term approach in building Afghan government and society, where the military was not an expert in the provision of providing stability in terms of a civil-centered approach.

(2) Minority non-Pashtuns Afghans were empowered and the majority Pashtuns were persecuted and sidelined.

(3) Being a Muslim neighboring country, Pakistan was neglected and its rival India was allowed to enter Afghanistan which had no roots in Afghanistan. India played its role there with the development of dams, roads, etc. It tried to control Afghanistan through developmental infrastructure.

(4) Former Afghan Presidents Hamid Karzai and Ashraf Ghani-Abdullah were unable to achieve stability in the country.

(5) A huge amount of 80 billion dollars were spent on Afghan National Security Forces (ANSF) in their training and equipment but there was a failure on discipline and moral fiber.

(6) The International Security Assistance Force (ISAF) was established by the UN Security Council in 2001 that was a NATO-led mission of the military in Afghanistan. It led to a great number of causalities in which the US sustained the most. ISAF was disbanded in 2014.

(7) The training of ISAF was not based on winning the heart of Afghans instead of winning the country by force. Lacking motivational training was found.

(8) The invasion in Afghanistan was based on already cooked-up charges of Iraq and Libya.

(9) As per the initial strategy, it was planned to establish bases in Tajikistan, Turkmenistan, Pakistan, and Uzbekistan for military force. Other than to target the inner circle of Taliban and Al-Qaeda. It made them a passage to enter into Pakistan that led to terrorism. The borders were not sealed and escape passage was given to the Taliban.

The US’s narrative and approach, even with military superiority, failed to uproot Taliban’s ideology and Islamic teachings. Islamic groups and Al-Qaeda have developed strong bases. They have not done fighting only, they empowered themselves with their ideological narratives. The real strength of the Taliban was seen in Helmand with a great number of casualties of ISAF. In 2009, they were curtailed into 8 military bases instead of going forward they moved backward and allowed Taliban to gain strength in eastern and southern Afghanistan. Obama’s government announced to vacate Afghanistan till 2014. The process of thinning troops started in 2011 till 2013. The thinning of strength also demoralized ISAF troops to fight strongly. Taliban movements were seen getting intense from that span. It proved to be a mistake from the government of Obama. The serious talks between the Taliban and the US have never been on the table of discussion. It was only planned through power. In this way, the US played more towards the blame game instead of stabilising the country. In the era of former President Trump, he tried to save the deteriorating security situation of the US and came into terms of negotiation with the Taliban at Doha in 2019. It had been proved a historic turning point through agreement, where the US agreed to withdraw its troops by May 2021 from Afghanistan. In Joe Biden’s era, again the historic turning point came where he announced to withdraw all its troops by September 2021 from Afghanistan’s land.

Due to this agreement and implementation by the US, the Taliban moved forward and captured a larger territory after May. Till July, the Taliban were able to capture 80 per cent of Afghanistan, including 22 provinces. Taliban entered main capital Kabul without any resistance in August 2021 and entered in Presidential palace. President Asharf Ghani fled the country and went to the United Arab Emirates secretly as soon as the Taliban entered Kabul. The former President came in front of the camera after a week or so with a recorded message that he fled the country to avoid any bloodshed. In a nutshell, the US’s strategy of empowering Afghanistan to strengthen democratic practices was failed by force that lead to political instability, chaos, and conflict. The local political stability with the implementation of democracy can be implemented with the negotiations of local communities by providing them an equal share of speaking rights. At the end of the Afghanistan war, only negotiations proved to be successful after a huge loss of financial and human lives.

The writer is a researcher at Universiti Tun Hussein Onn Malaysia and can be contacted at saira.asad2011@gmail.com 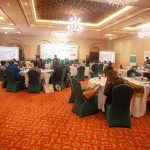