Army prepared to meet any challenge on borders

* COAS says armed forces have achieved unprecedented successes in fight against terrorism
* World must know that without resolution of Kashmir issue, peace and stability will remain illusive 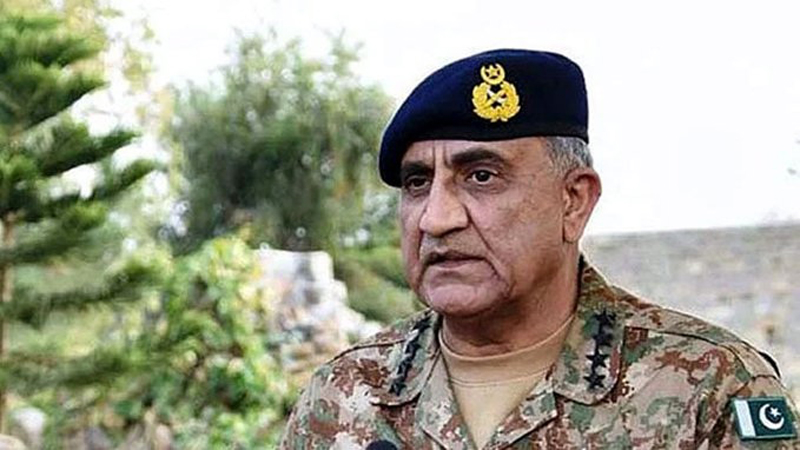 Chief of Army Staff (COAS) General Qamar Javed Bajwa Monday said that despite challenges, Pakistan’s borders are secure and the army is prepared to meet ‘any situation’, the Inter-Services Public Relations said in a press statement.

“Due to our timely steps for western zone border management, despite challenges Pakistan’s borders are secure and we are prepared to meet any situation,” the COAS said while talking to a delegation comprising members of Parliamentary Committee on Kashmir and the defence committees of Senate and National Assembly, who visited the GHQ.

The delegation was given detailed briefing on security environment including situation on the borders and Pakistan Army’s efforts for peace and stability. The delegation also had an exhaustive interactive session with General Qamar Javed Bajwa.

The army chief said that Pakistan’s armed forces, with support of the nation, have achieved unprecedented successes in fight against terrorism and bringing normalcy in the country. Alluding to the benefits of regional connectivity, the COAS highlighted the importance of restoration of peace in Afghanistan for sustainable development of the region.

The army chief reiterated Pakistan Army’s support and commitment to Kashmir cause and the people of Kashmir. “The world must know that without peaceful resolution of Kashmir issue, peace and stability will remain illusive,” he reiterated.

The session concluded with resolve to continue struggle against violent extremism through a synergetic and whole-of-the-nation approach.

The briefing by the COAS to the parliamentarians came amid fast changing regional scenario in the wake of Talban’s takeover of Afghanistan. As the US troops raced to complete their withdrawal from Afghanistan and evacuate allies under the threat of further violence, reports emerging on Monday revealed that a US drone strike near Kabul airport ended up killing 10 members of one family, including six children. The 10 were killed when a car parked at their home was struck by an explosion on Sunday. The US military said it was targeting a vehicle carrying at least one person associated with the Afghan branch of the Islamic State group.

The regional Islamic State-Khorasan group, rivals of the Taliban, pose the biggest threat to the US withdrawal, after carrying out a suicide bombing outside the airport late last week that claimed more than 100 lives, including those of 13 US troops. On Monday, they claimed to have fired six rockets at the airport.

Last week, General Bajwa, during a meeting with US Charge d’ Affairs to Pakistan Angela Aggeler, had said that Pakistan had no ‘favourites’ in Afghanistan. According to the ISPR, during the meeting matters of mutual interest, regional security and the recent situation in Afghanistan were discussed in detail. “Pakistan has no favourites in Afghanistan and our sole aim is helping achieve peaceful, sovereign stable and prosperous Afghanistan,” the COAS was quoted as saying by the ISPR.

A day earlier to that meeting, chief of UK’s Secret Intelligence Service (MI6) Richard Moore had called on General Qamar and discussed matters of mutual interests particularly evolving situation in Afghanistan, the military said in a statement. During the meeting, the army chief had said that Pakistan was helping achieve a peaceful, stable and prosperous Afghanistan. “Pakistan is willing to do whatever is possible to help Afghanistan achieve an inclusive settlement which is vital for regional peace and prosperity,” the statement had quoted Gen Qamar as saying.

Also last week, ISPR Director General Major General Babar Iftikhar had said the situation along Pakistan-Afghanistan border was stable and all required measures were in place to control mobility and contain any unwanted movement. “We have taken every possible step to maintain security at the border and every movement is under control there. But this does not mean that nothing can happen, something can happen, but we are prepared; it is not that we will be unaware of that,” the military spokesperson had said while briefing media over evolving situation in Afghanistan and implied national security risks likely to be faced by the country.