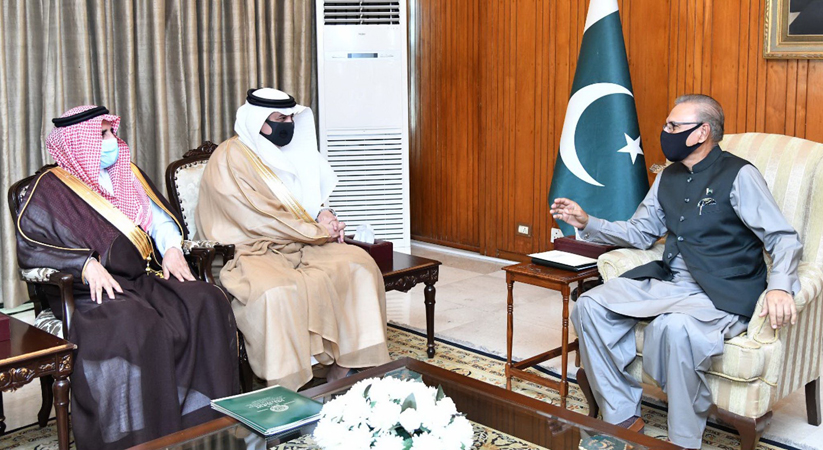 President Dr Arif Alvi on Friday said Pakistan attached utmost significance to its relations with the Kingdom of Saudi Arabia, which were based on common faith and mutual respect.

He stated that both brotherly countries had longstanding and deep-rooted fraternal relations, which needed to be further strengthened for the mutual benefit of the two countries. The president made these remarks while talking to Ambassador of Kingdom of Saudi Arabia to Pakistan Nawaf bin Said Al-Malki, and President of the International Islamic University Islamabad (IIUI) Dr Hathal Homoud Alotaibi, here at Aiwan-e-Sadr.

Welcoming the Ambassador and the President of IIUI, President Dr Arif Alvi said both brotherly countries enjoyed excellent relations and there existed great potential between the two countries to further enhance economic and cultural relations. He emphasized the need for bilateral exchanges at high-level that would bring the two countries further closer.

He expressed the hope that the visit of Prime Minister of Pakistan to Saudi Arabia undertaken in May and the Saudi Foreign Minister’s visit to Pakistan in July would further boost bilateral cooperation.

The President thanked Saudi Arabia for providing financial support to Pakistan that helped rescue the country from financial problems.

Dr Hathal Homoud Alotaibi briefed the President about the new strategic plan of the University aiming to improve governance and quality of education. He informed that the University was establishing a new department to provide distance learning to students. The President also discussed the recently formulated policy by Higher Education Commission focusing on prevention of drug and tobacco abuse at universities. He said that the policy would help prevent drug abuse in universities and provide healthy and enabling environment to students.