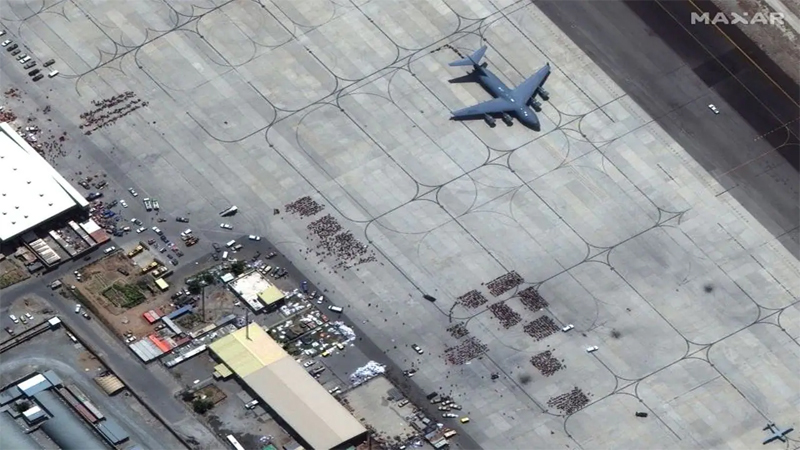 US forces helping to evacuate Afghans desperate to flee new Taliban rule were on alert for more attacks on Friday after an Islamic State attack killed 92 people including 13 US service members just outside Kabul airport.

General Frank McKenzie, head of US Central Command, said US commanders were watching for more attacks by Islamic State, including possibly rockets or car bombs targeting the airport.

“We’re doing everything we can to be prepared,” McKenzie said, adding that some intelligence was being shared with the Taliban and he believed “some attacks have been thwarted by them”.

Thursday’s two blasts and gunfire took place near the airport gates where thousands of people have gathered to try to get inside the airport and onto evacuation flights since the Taliban took control of the country on Aug 15.

US and allied forces are racing to complete evacuations of their citizens and vulnerable Afghans and to withdraw from Afghanistan by an Aug. 31 deadline set by President Joe Biden.

Most of the more than 20 allied countries involved in airlifting Afghans and their own citizens out of Kabul said they had completed evacuations by Friday.

Britain said it was in the final stages while the United State said it would continue airlifting people right up to next Tuesday although it would will prioritize the removal of US troops and military equipment on the last couple of days. Islamic State (ISIS), an enemy of the Islamist Taliban as well as the West, said one of its suicide bombers had targeted “translators and collaborators with the American army” on Thursday. The attack underlined the realpolitik facing Western powers in Afghanistan: engaging with the Taliban who they have long sought to fend off may be their best chance to prevent the country sliding into a breeding ground for Islamist militancy.

The number of Afghans killed has risen to 79, a hospital official told Reuters on Friday, adding more than 120 were wounded. A Taliban official said the dead included 28 Taliban members, although a Taliban spokesman later denied that any of their fighters guarding the airport perimeter had been killed.

It was not clear if suicide bombers detonated both blasts or if one was a planted bomb. It was also unclear if ISIS gunmen were involved in the attack or if the firing that followed the blasts was Taliban guards firing into the air to control crowds.

Hard-pressed medical staff in the three operating theatres of Kabul’s Emergency Hospital worked through the night into Friday treating casualties.

“Everybody is concerned at this moment in Kabul, nobody knows what to expect in the coming hours,” said Rossella Miccio, president of the Italian aid group that runs the hospital.

Biden said on Thursday evening he had ordered the Pentagon to plan how to strike ISIS-K, the Islamic State affiliate that claimed responsibility. The group has killed dozens of people in attacks in Afghanistan in the past 12 months.

Biden, criticized at home and abroad for the chaos around the final US troop withdrawal even before Thursday’s deadly attacks, says the United States long ago achieved its original rationale for invading the country in 2001.

The U.S.-led invasion toppled the then-ruling Taliban, punishing them for habouring al Qaeda militants who masterminded the Sept. 11 attacks.

Taliban guards blocked access to the airport on Friday, witnesses said. “We had a flight but the situation is very tough and the roads are blocked,” said one man on an airport approach road. Another 12,500 people were evacuated from Afghanistan on Thursday, raising the total airlifted abroad by the forces of Western countries since Aug. 14 to about 105,000, the White House said on Friday.

The United States will press on with evacuations despite the threat of further attacks, McKenzie said, noting that there were still about 1,000 US citizens in Afghanistan.

The pace of flights accelerated on Friday and American passport holders had been allowed to enter the airport compound, according to a Western security official inside the airport. British Defence Secretary Ben Wallace said the threat of attacks would increase as Western troops got closer to completing the huge airlift and leaving.