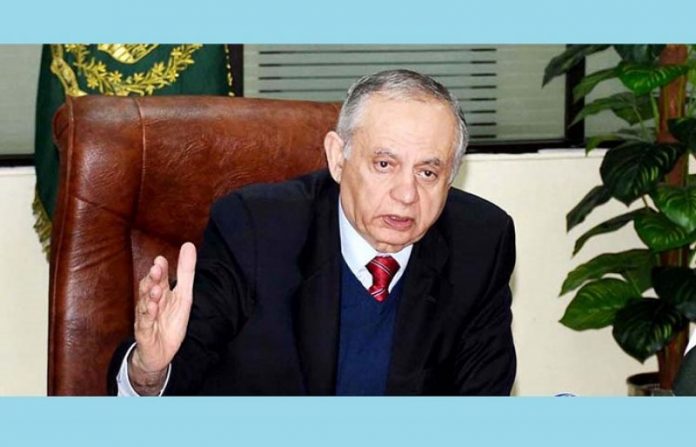 ISLAMABAD: Adviser to the Prime Minister on Commerce Abdul Razak Dawood Friday said his main focus was on raising exports which would help to strengthen the country’s economy.

He said this while addressing a press conference along with Minister for Finance Shaukat Tarin and other business leaders from the different Industrial sectors. Razak said the government had fixed the target for the country’s total exports at $38.7 billion during the current fiscal year out of which $31.2 billion export target was fixed for goods while the rest $7.5 billion for the services sector.

“So far, we are on target in goods’ exports while we are also hopeful to achieve the services exports’ target,” he added. The adviser noted that at present, the pressure was mounting on the country’s imports which would be controlled.

He said the imports of the country were high because traditionally Pakistan always relied on trade that was not ‘Made in Pakistan’. “Now we are implementing the policy of ‘Made in Pakistan’. The best example of which is that the number of locally manufactured mobile phones have now exceeded the phones that were imported,” he added.

In addition, he pointed out that industrialization in the country was increasing because of tariff rationalization. He said the government had waived off the tariff on 50 percent raw material for enhancing the manufacturing of the country.

He said export diversification, focusing on non-traditional sectors and increasing exports to new markets, including the African market, would not only enhance the volume of the country’s exports but would also help to achieve the export targets.

‘Made in Pakistan’ is the government’s top priority trade policy, which aims to introduce Pakistan’s traditional and non-traditional export sectors and local products in the international trade market. The adviser said now the export of mobile and motorcycles from Pakistan would be started within the same trade policy.

He said the export of these two products to the global market would usher in an era of exporting engineering products from the country. Razak said at present, the share of engineering goods exports in the global trade market was 51 percent.

He said Pakistan now wanted to make a name for itself in the world in non-traditional sectors, including engineering and pharmaceuticals. He said the country’s information technology (IT) exports had grown at 47 percent, which indicates that IT exports crossed the mark of $ 2 billion.