Comprehensive strategy put in place to ensure sustainability in growth 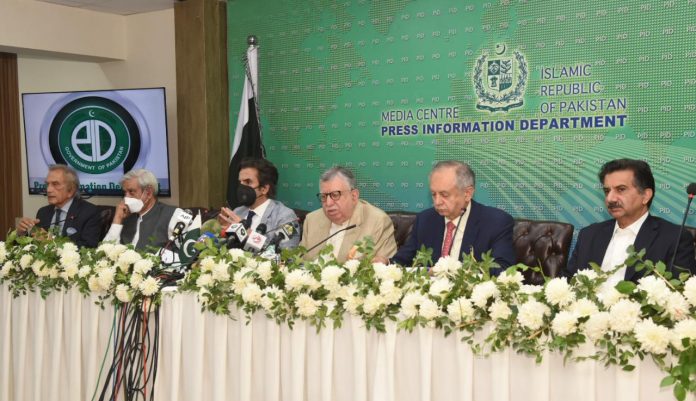 ISLAMABAD: Federal Minister for Finance and Revenue, Shaukat Tarin said today (Friday) that the government had put in place comprehensive plans, focusing on 14 special sectors of the economy, to ensure planned and sustainable economic growth in the country.

Addressing a press conference, the minister said that it was after the year 1972 that such a strategy was being presented by the government under which short, medium and long-term plans were being devised by working groups with the consultation of stakeholders and their implementation would be monitored.

The minister said that from September, monitoring of performance in these 14 sectors would be monitored and the Prime Minister would be given a briefing about the execution of the plans every month. Hence, the minister said, the plans do not only focus only on devising strategies but also on ensuring their implementation, which he said was unprecedented.

He said that there were growth cycles of 4 to 5 years, but the country could not sustain it due to inconsistency, hence this strategy was aimed at bring stability and sustainability in economic policies and performances. He said that making this comprehensive plan was the organised way of moving forward as is being practised in developed countries.

He said, if there was no plan, everyone would be going in their his/her direction, hence would lead the country to nowhere, so these short, medium and long term plans have been devised with the help of all stakeholders to go on right direction.

The minister said that economic experts of Pakistan Institute of Development Economics (PIDE) would be helping different ministries to implement the plan, hence there was no need to have fresh inductions in the ministry. He said the Economic Reform Unit at the Ministry of Finance would be facilitating these activities.

Talking about the performance of the economy, the minister said that the economic indicators were showing positive results citing Business Confidence Index (BCI) Survey that indicated that the overall BCI has increased by 59%, adding that textile exports also went up by 17 percent whereas the country was now exporting mobile.