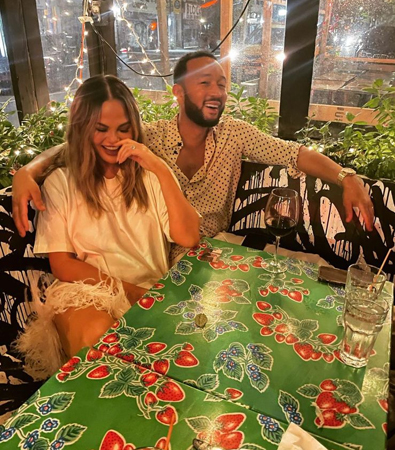 Chrissy Teigen is coming to terms with the pain she’s been avoiding.

Nearly a year since suffering a stillbirth, the cookbook author wrote candidly about how she’s avoided processing the loss of her third child, Jack. In an Instagram post uploaded on Sunday, Aug. 22, the 35-year-old TV personality, who has faced controversy this year over bullying allegations, shared a photo of herself and husband John Legend at New York City Italian eatery Frank, a favourite of the couple’s.

“We’ve been going to @frankrestaurant for…man, maybe 13, 14 years now??” she wrote. “We used to live just a couple blocks away, right across from the hell’s angels in the east village.”

Back then, she described, Teigen would take her dog Puddy to sit outside at the restaurant or she would sit alone inside, reading Glamour and trying everything on the menu “I would never ever miss a Thursday. Thursday was lasagna verde day,” she recalled. “I’d sit there with my multiple double vodka sodas and get day drunk by myself then buy hats I didn’t like or need at urban outfitters. I still can’t wear hats for some reason.”

Back then, she described, Teigen would take her dog Puddy to sit outside at the restaurant or she would sit alone inside, reading Glamour and trying everything on the menu, ‘I would never ever miss a Thursday’

Her lengthy, detailed recollection was all to say she’s been in a nostalgic mood as of late. “Anyhowwwww just reminiscing about New York a lot lately, when things were simple,” she wrote, “thinking about all the stuff I’ve done and been through not just this year but in my life.”

A significant moment in her life last year was the tragic loss of her baby. “I’m slightly down lately,” Teigen, who is also mom to Luna, 5, and Miles, 3, admitted to fans. “It kind of started when I was thinking of my book caption and typed out ‘my third baby is here!!’, as in cookbook, then realized my third baby will never be here.”

She continued, “I realized i threw myself into the book to not think of the real, actual third baby. I don’t really feel like I fully processed jack and now that I don’t have the alcohol to numb it away, things are just…there, waiting to be acknowledged.”

In December, she confirmed to fans that she was a month into sobriety. On Aug. 12, she announced to social media followers that she is coming out with a third cookbook, Cravings All Together: Recipes to Love. It follows Cravings, which she released in 2016, and Cravings: Hungry for More, which dropped two years later. “I guess what I’m saying here is life is so f–king complicated,” she concluded her message, “and get the lasagna??? wow this was a rollercoaster !!!!!”