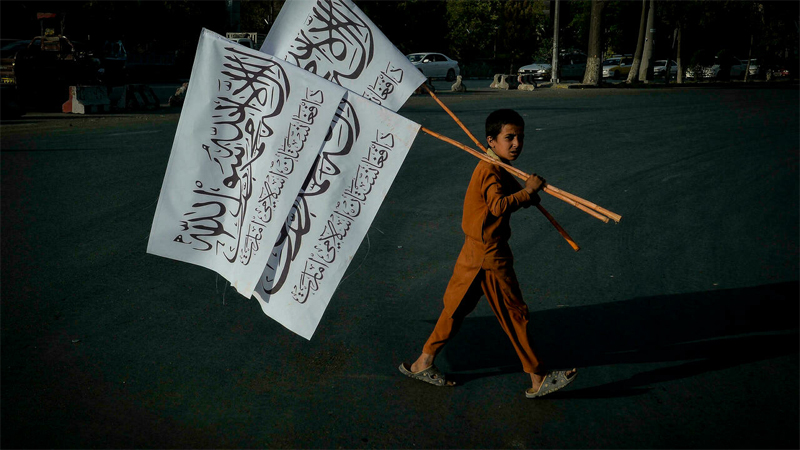 After two decades out of power, the Taliban are swiftly moving to stamp their authority on Afghanistan using every tool at their disposal — including flags.

Since rolling into Kabul a week ago, the white banner of the Islamist militants has become a common sight across the country, replacing the national tricolour flag above government buildings, police stations and military facilities.

There have been scattered reports of people being castigated or even punished for waving the old national banner, but so far there is no official word from the group on the flag issue.

At a Kabul roadside on Sunday, vendors were making a quick sale in Taliban flags — a white banner bearing the Muslim proclamation of faith and the regime’s formal name: “Islamic Emirate of Afghanistan”.

“Our goal is to spread the flag of the Islamic Emirate throughout Afghanistan, instead of the tricolour flag,” said vendor Ahmad Shakib, who studies economics at university.

It was not clear if he was affiliated with the Taliban.

The sight of Taliban fighters in vehicles bearing the standard has terrorised people across Afghanistan in recent weeks as the militants first captured vast swathes of the rural hinterland and then all the major cities.

The group was quick to replace the Afghan national flag wherever it could.

But in the middle of the despair and fear sparked by the Taliban takeover, the old flag has become something of a symbol of defiance for many, featuring prominently in the small protests held in recent days.

My heart is here: Social media has been awash with images and emojis of the old flag — a black, red and green vertical tricolour with the national emblem overlaid in white — posted by public figures including sports stars and many ordinary Afghans.

On Afghanistan’s independence day last week, groups of people waved the national flag in Kabul and a handful of suburbs to celebrate — sometimes in plain sight of patrolling Taliban. At one rally, people on a convoy of honking cars waved national flags in Kabul. At another spot, men and women stood by the roadside holding the tricolour banner.

A day earlier, Taliban fighters fired guns to disperse dozens in the eastern city of Jalalabad who were protesting over the removal of the national flag, according to local media.

“My heart is here for this flag… I will never leave this flag,” said one Jalalabad resident.

“Kill us, fire at us… We will never leave this flag.”