* On Friday, the group, minus Samuel, attended a performance of the Broadway musical Hamilton at the Pantages Theatre, along with Ben's mother, Chris Anne Boldt 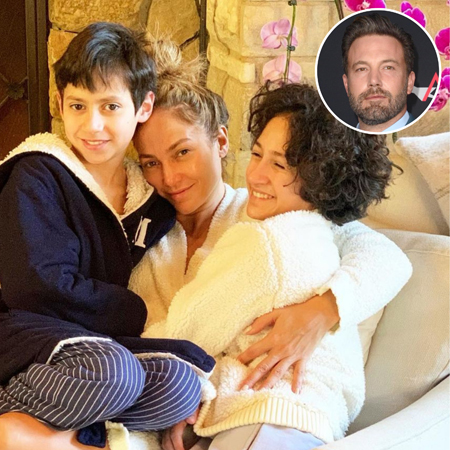 Jennifer Lopez and Ben Affleck had a magical and full family fun weekend! The couple, who rekindled their romance almost four months ago, brought their children with them on excursions in Hollywood-the actor’s kids Violet, 15, Seraphina, 12, and Samuel, 9, and JLo’s 13-year-old twins Max and Emme.

On Friday, Aug. 20, the group, minus Samuel, attended a performance of the Broadway musical Hamilton at the Pantages Theatre, along with Ben’s mother, Chris Anne Boldt. Earlier in the day, Ben treated all three of his kids to a trip to the Century City shopping mall.

On the afternoon of Saturday, Aug. 21, Ben and Jennifer brought all five of their children and his mom to a show at the Magic Castle, an exclusive and pricey clubhouse and restaurant for magicians and magic enthusiasts. Ben and J.Lo were seen holding hands as they headed into the building.

“They had a very full family weekend of fun,” an eyewitness told E! News. “Ben’s mom also came along and got to know J.Lo’s kids.”

The eyewitness continued, “Everyone seemed to get along great. Seraphina and Emme were walking around with their arms linked. Ben and J.Lo held hands and were affectionate in front of the kids.”

The eyewitness also said J.Lo “was very chatty” with Ben’s daughters. “They all got along very well and seem like a blended family unit,” the person added about the two families. “They were all talking together, laughing and smiling.”

This appears to be the first time the pop star, who was engaged to Ben between 2002 and 2004-before either of them had children, has ever been photographed in public with the actor’s eldest daughter or his mother.

In June, Ben spent time with J.Lo’s mom, Guadalupe Rodríguez, in a casino while directing a project in Las Vegas.

“Guadalupe loves Ben,” a source close to the actor told E! News at the time, adding that the Hustlers actress’ mother “is happy that he is back in Jennifer’s life.” Over the past few months, J.Lo and her twins have been spotted on outings with Ben and sometimes, his youngest two children have gone with him.

And it appears the singer has been making attempts to bond with his kids. Last weekend, the singer was seen picking out jewelry at an event at producer Jennifer Klein’s house. The jeweler, Made by Mary, confirmed to E! News that J.Lo purchased items from its birth flower collection, which included the December Holly and January Carnation pieces. Violet and Seraphina’s birthdays are in December and January, respectively.

Meanwhile, J.Lo appears to be settling back in Los Angeles nicely. In June, a source told E! News that the singer, who has lived there before, plans to make the city her case and was “looking at schools for her kids in the fall.”

As for her and Ben, the two are are “completely on the same page” about holding off on another proposal, another source close to J.Lo told E! News in July.