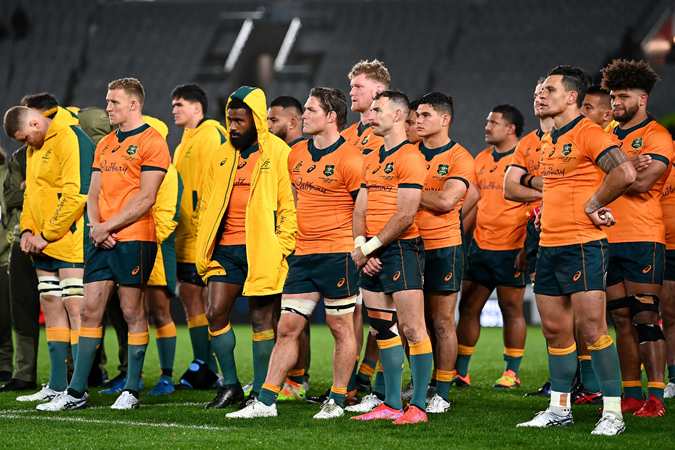 Australia has threatened to pass on a multi-million dollar bill to New Zealand if they fail to show up for a Bledisloe Cup Test in Perth, a report said Sunday, as Queensland was firmed up as host for the pandemic-hit Rugby Championship.

The All Blacks failed to travel to the West Australian city as scheduled this weekend for the August 28 clash against the Wallabies, citing uncertainty around coronavirus restrictions.

The decision sparked fury from Rugby Australia, whose chief Andy Marinos claimed he only heard about it through the media as talks with the state government around securing an exemption to mandatory quarantine were progressing.

He said Sunday he now hopes to lock in September 4 for the Test and New Zealand Rugby (NZR) had been asked to provide written assurance they will not bail out again.

“I want it in writing. We have an email, but we need a letter for both the government and the stadium as well,” he told the Sydney Morning Herald. “That should be forthcoming pretty soon.”

The newspaper said that if the All Blacks fail to turn up, the West Australian government intended to recoup the Aus$5 million (US$3.56 million) they paid to Rugby Australia to play the game in Perth.

“I’ve made New Zealand very aware that we have a contract and they’ve made a commitment,” he said.

The All Blacks have five Tests remaining in the Rugby Championship, one against Australia and two each against South Africa and Argentina.

NZR have said their two Tests against South Africa next month would no longer be played at home after government advice that the Springboks would not be able to enter due to a Covid-19 lockdown.

The Argentina Tests had already been moved to Australia.

South Africa has offered to host the remainder of the games if teams cannot travel to Australia, where states including New South Wales and Victoria are in lockdown to tackle outbreaks of the Delta variant.

Europe has also been touted as a potential host, but Marinos said Queensland was the priority.

“Queensland is absolutely a priority for us. Until such time that we cannot make it work, that’s the priority,” he said.

The newspaper said Queensland had fast-tracked a proposal to approve South Africa and Argentina’s entry into the country and into “managed isolation”, with the plan advancing to the point of venues being secured.

“We are working very hard to get all the approval and assurances done. The Queensland government have been fantastic in working alongside us,” said Marinos.

“There was never any doubt about whether we could play there. It was just doubt that we could get South Africa and Argentina through managed isolation.”