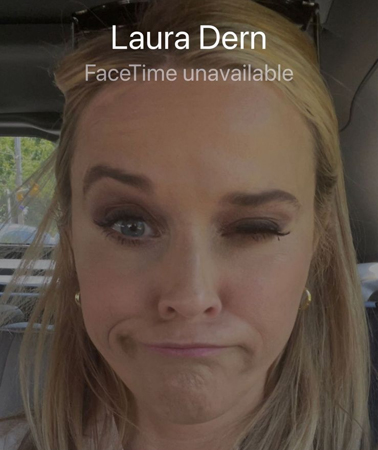 Things are getting a little wild after Reese Witherspoon called out Laura Dern for not picking up her phone. On Thursday, Aug. 19, the two stars, who co-starred in the 2014 film Wild, hashed out a playful disagreement through social media after Reese complained on Instagram that the Jurassic Park actress didn’t answer Reese’s FaceTime call.

The back-and-forth began in the morning when Reese posted a screenshot of herself cringing after unsuccessfully trying to reach her friend on FaceTime. “Dern? You there?,” the 45-year-old The Morning Show actress captioned it.

This led Laura, 54, to post video to her own Instagram account of herself asking, “What?,” and she tagged Reese. The Little Fires Everywhere star then took to the comments section to share, “Answer the PHONE!!!!”

Hours later, Reese posted footage to her Instagram Story of herself saying, “You guys, do you ever have a friend who doesn’t answer your phone calls but is clearly on her phone because it looks delivered? And also, you know she’s on Instagram because she posted?” In a follow-up Story, Reese tagged Laura and added, “Because I have a friend like that, too,” before staring pointedly at the camera.

Thankfully, the issue appeared to have gotten resolved, as Laura shared a playful screenshot to her Story toward the end of the night of herself returning Reese’s FaceTime call.

A silver lining from all of this is the reminder that even celebrities get ghosted. Last month, after Lance Bass had given Justin Timberlake a hard time on social media for not texting back, Justin responded by explaining that the demands of parenting had limited his free time.