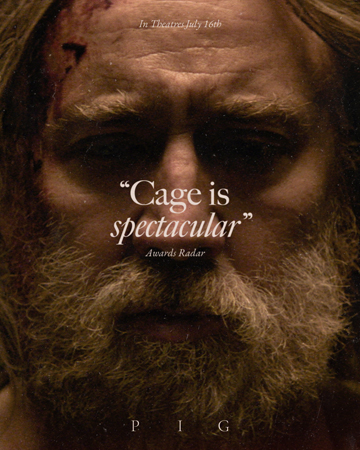 A hunting pig has been kidnapped. Her grizzled owner, Rob, abandons a quiet, off-grid life in the woods and sets out on a recovery mission, chauffeured by a yuppie-ish truffle buyer named Amir. It is soon revealed that Rob is a former superstar chef. Forget the title: this film isn’t really about a pig. Instead, it’s an understated indie drama more interested in nostalgia, daddy issues and the restaurant industry in Portland, Oregon. Co-writer and director Michael Sarnoski has an eye for unadorned natural beauty, and Patrick Scola’s sensual cinematography celebrates the golden light that streams through a kitchen window and the textures of the Pacific north-west’s autumn foliage. It appears Sarnoski values no-frills authenticity on the plate too, having Rob unleash a haughty diatribe against the pretensions of molecular gastronomy over a dish of scallops “bathed in the smoke of Douglas fir cones”. Though the film is teed up as a kind of John Wick-style revenge bender, Cage’s star persona is soon smartly subverted.