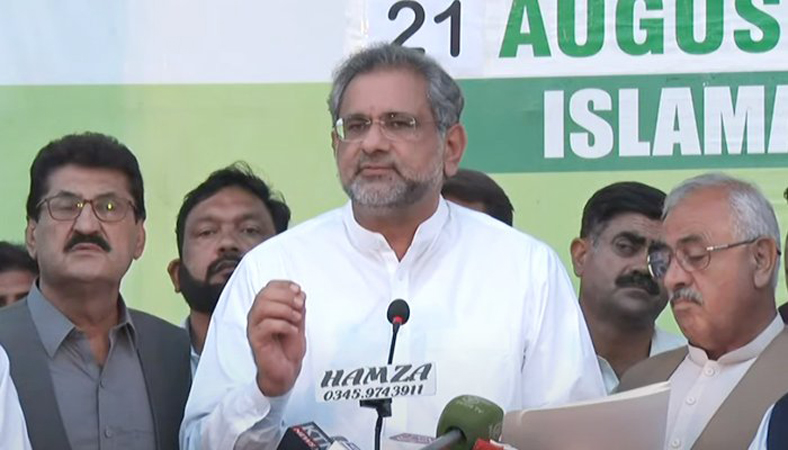 The Pakistan Democratic Movement (PDM) on Saturday announced that it will present a white paper against the government’s performance over the last three years, which will ‘expose its corruption, prejudiced accountability and rigging in the elections’, a private TV channel reported.

Speaking to media after a meeting of the PDM in Islamabad, PML-N leader and former prime minister Shahid Khaqan Abbasi said the ‘evidence’ is being gathered and a white paper will be presented from the PDM’s platform to ‘expose’ the PTI government before the people. He rejected the government’s proposed electoral reforms, including the use of electronic voting machine (EVM), calling such measures ‘unilateral’ and ‘in contradiction with the constitution and laws’.

Reacting to the government’s offer of talks on electoral reforms, Abbasi said, “All the parties [in the PDM] have once again rejected the unilateral electoral reforms as they are tantamount to rid people of their freedom of speech.” “The reason behind the incumbent government’s failures is the rigging of the 2018 general elections, and till the time this country’s affairs are not in line with the Constitution, the problems of the people cannot be resolved,” the former prime minister said. “It is crystal clear that democracy cannot thrive in Pakistan till the elections are not transparent and held without interference,” he said, adding that representatives of all parties who attended the meeting backed these views and reiterated that running the country according to the constitution was the need of the hour.

Abbasi said that the country’s ‘so-called accountability process’ was an ‘attempt to mask the corruption of the government and its ministers’, adding that there had been attempts to rig all elections. “The proof is in front of the people. We will present a white paper regarding this after collecting all the facts,” he added.

Abbasi said the participants of the meeting have prepared a schedule for rallies across the country, which will be presented before a meeting in which all party heads will be in attendance. “The meeting will take place on August 28, and it will finalise the schedule,” he said.

Abbasi said the participants of the meeting also reiterated their rejection of the ‘unilateral’ electoral reforms, which they termed as the government’s bid to ‘steal’ the next elections. He said the government is trying to ‘rob people of their right to select their representatives’ by introducing electoral reforms. “The PDM, nearly six months back, had issued an initial Charter of Pakistan that aimed to resolve the issues of the people, however, the work on it was interrupted, and it could not be completed,” he said, adding that a committee has been formed which would chalk out another ‘Charter of Pakistan’ within six weeks and present it before the PDM’s leaders. “It will aim to establish real democracy in the country,” he added. Responding to a question, the former prime minister said Maulana Fazlur Rehman had congratulated the Taliban for taking over the country as the chief of the JUI-F. “It is not a hidden fact,” he said.

Jeering at the opposition parties over ‘disintegration’ of the alliance, Minister of State for Information and Broadcasting Farrukh Habib on Saturday said they just want an NRO-type concession to escape accountability process launched by Prime Minister Imran Khan against their corruption. “The group of unemployed politicians will never get an NRO,” he reiterated in a tweet.