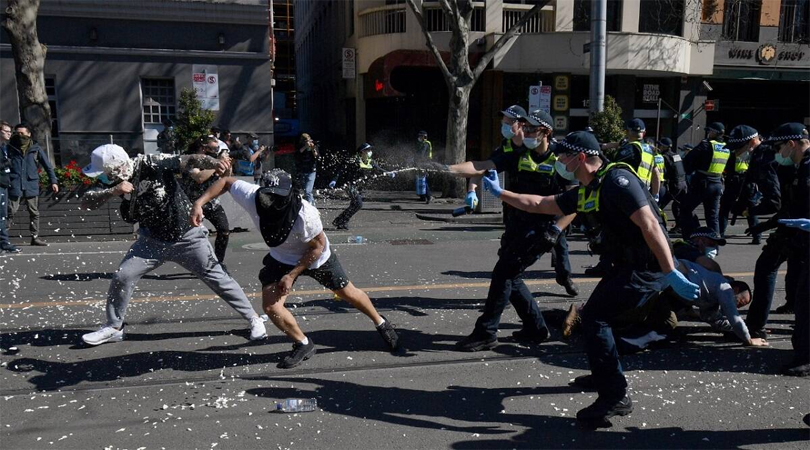 Australian police arrested hundreds of anti-lockdown protesters in Melbourne and Sydney on Saturday and seven officers were hospitalised as a result of clashes, as the country saw its highest ever single-day rise in COVID-19 cases.

Mounted police used pepper spray in Melbourne to break up crowds of more than 4,000 surging toward police lines, while smaller groups of protesters were prevented from congregating in Sydney by a large contingent of riot police.

Victoria state police said that they arrested 218 people in the state capital Melbourne. They issued 236 fines and kept three people in custody for assaulting police. The arrested people face fines of A$5,452 ($3,900) each for breaching public health orders. Police in New South Wales, where Sydney is the capital, said they charged 47 people with breaching public health orders or resisting arrest, among other offences, and issued more than 260 fines ranging from A$50 ($35) to $3,000. The police said about 250 people made it to the city for the protest.

Sydney, Australia’s biggest city with more than 5 million people, has been in a strict lockdown for more than two months, failing to contain an outbreak that has spread across internal borders and as far as neighbouring New Zealand. The vast majority of the 894 cases reported across Australia on Saturday were found in Sydney, the epicentre of the Delta variant-fuelled outbreak.