* In a Hollywood surprise, the couple was able to keep the pregnancy private 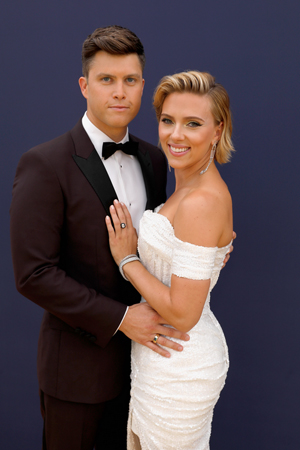 Surprise! Scarlett Johansson and Colin Jost are both parents. The actress’ rep confirmed to People on Wednesday, Aug. 18 that the couple recently welcomed their first baby together. Shortly thereafter, Colin would reveal the baby’s name and sex. Find out those details here!

In a Hollywood surprise, the couple was able to keep the pregnancy private. But during a recent comedy show, Colin dropped a hint that his family was growing. “Colin made the announcement from the [Ridgefield Playhouse] stage,” an audience member recently shared with E! News. “He played two sold out shows on Sunday [Aug. 15] and casually dropped that he and Scarlett are expecting soon.”

News of the special milestone in the ‘Black Widow’ actress and ‘Saturday Night Live’ star’s relationship comes several months after they tied the knot in a private October 2020 ceremony.

“We’re thrilled to break the news that Scarlett Johansson and Colin Jost were married over the weekend in an intimate ceremony with their immediate family and loved ones, following COVID-19 safety precautions as directed by the CDC,” the non-profit organization shared in a statement. “Their wedding wish is to help make a difference for vulnerable older adults during this difficult time by supporting @mealsonwheelsamerica.”

The duo, who got engaged following a two-year courtship, seldom discuss their love story publicly. However, Colin sang his wife’s praises in his 2020 memoir.

The 39-year-old described Scarlett as having “a grace and a smile that I’ve still never seen in any other human,” adding, “I’ve met someone I love and who I feel more comfortable with than I ever have before. I feel more confident committing to what I’m working on and standing by whatever I create, regardless of whether people like it or not.”

Likewise, Scarlett, 36, has attested to Colin’s romantic side. Following his proposal, the Oscar nominee dished to Ellen DeGeneres about the fairytale occasion.

“It was a very special moment,” she recalled in 2019. “And I think, more than anything, when someone tells you they want to share the rest of their life with you, it’s a lovely, special thing.”

Meanwhile, Colin’s SNL colleague, Michael Che, has joked about how their friendship has evolved since the comedian connected with the movie star.

“He’s changed a lot since, I feel like, you’ve changed, you don’t invite me places,” he teased during a 2018 appearance on The Ellen DeGeneres Show. “And when you do, you ditch me.”

“Well, yeah, because if you’re with like Scarlett Johansson I don’t want to tell you to come to this dive bar with me and watch a Yankees game,” he said. “I feel like maybe you have better things to do.”