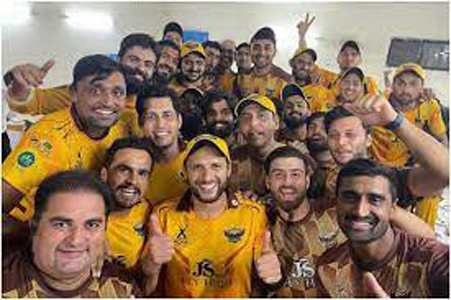 ISLAMABAD: Rawalakot Hawks on Tuesday defeated Muzaffarabad Tigers by seven runs to win the final of the Kashmir Premier League (KPL) at the Muzaffarabad Cricket Stadium. Muzaffarabad were able to score 162 runs in 20 overs against the fall of seven wickets, after being given a 170-run target. Muzaffarabad’sZeeshan Ashraf remained prominent in his side’s efforts, scoring 46 runs off 26 balls. Zeeshan was followed by Muhammad Hafeez (29), Muhammad Waseem Jr. (22), and SohailTanveer (21). Rawalkot’s’ bowlers AsifAfridi and HussainTalat gave a stellar performance with each bagging 3 wickets each. Skipper ShahidAfridi also sent two players back to the pavilion. In the first innings, Rawalkot’sKashif Ali remained prominent as he scored a half-century with 54 runs. Kashif was followed by Bismillah Khan (30), SahibzadaFarhan (28), and Umar Amin (23). At the bowler’s end, Muzaffarabad’sHafeez and Usama Mir managed to grab two wickets each.