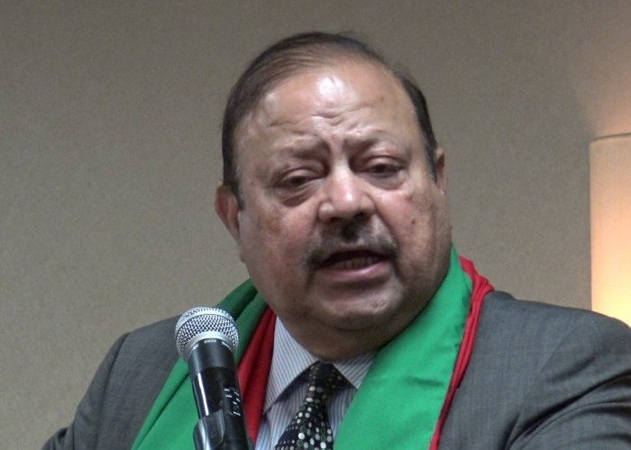 The newly elected president will take oath of the office on August 24 after expiry of the outgoing President Sardar Masood Khan’s tenure.

The election took place at AJK legislative Assembly special session convened for the purpose, with speaker Chaudhary Anwar Ul Haq in chair and a total of 50 members who casted their votes out of 52.

Those who did not cast their vote were Pakistan People’s Party (PPP) member from Kotli Ch. Yaseen and Pakistan Muslim League Nawaz (PMLN) member and former speaker Shah Ghulam Qadir.

Barrister Sultan started his political carrier in 1983 after completion of his education from United Kingdom and elected as youngest member of AJK legislative Assembly in 1985 from the platform of Azad Muslim Conference, a party founded by his father late Ch. Noor Hussain. He has the special honor to be elected 9th time member of Azad Jammu and Kashmir Assembly from 1985 onward and was elected as President in the capacity of member legislative Assembly. The seat would be declared vacant after he takes oath of his office. He was elected as Prime Minister Azad Jammu and Kashmir from the platform of PPP in 1996 to 2001. He also served as Minister and opposition leader in the legislative Assembly.

The newly elected President also headed many political parties like Jammu Kashmir Liberation League after Azad Muslim conference, Pakistan People’s Party, Peoples Muslim League which he himself founded and at present he is part of PTI.