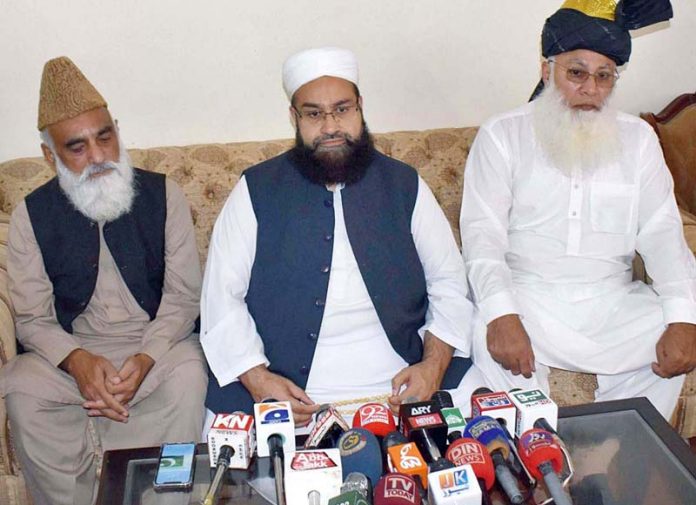 Addressing a press conference here at press club, Tahir Ashrafi said there was an ideal atmosphere of interfaith harmony in the country and people of all schools of thought were performing their religious obligations with complete freedom.

He said protection of rights of minorities was the prime responsibility of the government and strict action would be taken against those who found involve in any such activities.
Ashrafi said effective security measures have been taken for peaceful observance of Ashura.

He said a high-level meeting of senior ulema and mashaikh and leadership of different schools of thought was recently held which agreed to support government endeavors for maintaining religious harmony during Muharramul in accordance with the draft of
Paigham-e-Pakistan.

As per the Paigham-e-Pakistan agreed draft, he informed that ulema and mashaikh of all schools of thought would ensure an atmosphere of honour and affection, tolerance and understanding among themselves and respect for leadership of other religious sects.

The religious scholars, preachers and writers should focus on adopting a balanced and moderate approach in their speeches and writings avoiding any offensive or harsh statements against other sects.

Tahir Ashrafi said the cooperation of Ulema-Mashaikh was imperative for establishing peace and maintaining law order during Ashura.

He said Pakistan was a strong country and the government would not allow anyone to disrupt the prevailing peaceful atmosphere of interfaith harmony.

To a question about recent developments in Afghanistan, he said, Pakistan has adopted a principle stand on Afghanistan issue. “We would not allow anyone to use our soil for ulterior motives. We would also not allow that soil of other countries may be used for planning or launching terrorist activities against Pakistan,” he said.

He said peace in Afghanistan was in the best interest of Pakistan. He expressed the hope that leadership of all political-religious parties including Afghan Taliban would sit together to find out a durable and peaceful solution of Afghanistan conflict.

“Pakistan is a facilitator of peace and not war,” he said, adding, “We support a
the broad-based political settlement of the Afghan issue”.

He expressed the hope that the Afghan Taliban would succeed in establishing durable peace in Afghanistan.

Tahir Ashrafi said the uniformed education system launched by Prime Minister Imran Khan in the country would also help counter discrimination and inferiority complex
among students. He said equality in education was imperative for sustainable progress and economic development in the country.

The PM aide urged the media to play an effective role in the promotion of interfaith harmony during Moharram. He urged people not to pay head to rumours and contact relevant organisations for confirmation of any information before spreading it among others.