* Thousands of Afghans pack into airport, pushing onto planes in attempts to flee country 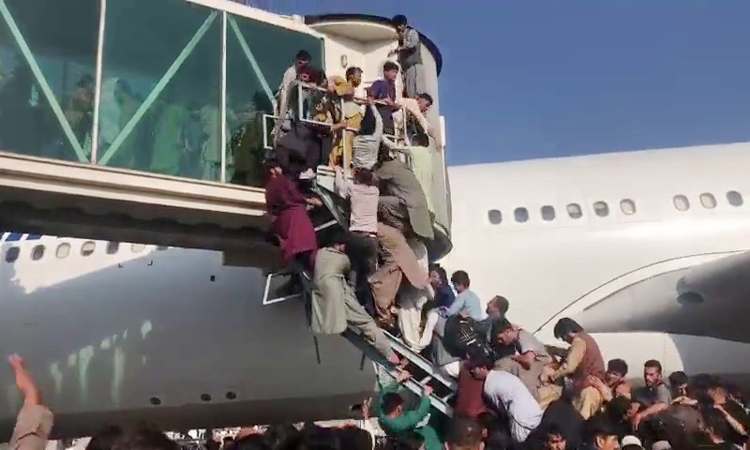 At least five people were killed as thousands packed into the Afghan capital’s airport on Monday, rushing the tarmac and pushing onto planes in desperate attempts to flee the country after the Taliban overthrew the Western-backed government. US soldiers fired warning shots as they struggled to manage the chaotic evacuation. Senior US military officials said the chaos at Kabul airport left seven people dead, including some who fell from a departing American military transport jet. The officials spoke on condition of anonymity because they were not authorised to publicly discuss ongoing operations. One witness told Reuters he had seen the bodies of five people being taken to a vehicle. Another witness said it was not clear whether the victims were killed by gunshots or in a stampede. Meanwhile, a Pentagon official said US soldiers had killed two armed men at the airport. “In the thousands of people who were there peacefully, two guys who had weapons brandished them menacingly. They were both killed,” the official said, insisting on anonymity. Some of the thousands of Afghans trying to flee clung to the side of a US military plane before takeoff, in a widely shared video that captured the sense of desperation as America’s 20-year war comes to a chaotic end. Another video showed the Afghans falling as the plane gained altitude over Kabul. Tolo News reported that at least 10 people were killed in the mayhem. Meanwhile, all commercial flights were suspended at Hamid Karzai International Airport in Kabul, according to a statement by the airport authority. BBC reported that US troops were taking control of Kabul’s international airport and the US military had secured the site. The publication added that US troops had taken over air traffic control to evacuate American and allied staff. US troops, who are in charge of the airport, earlier fired in the air to scatter the crowd, a US official said. Three Afghan citizens were killed Monday after falling off a United States aircraft as it took off from the Hamid Karzai Airport, British media reported Monday. As per the reports, three Afghan citizens hung on to the aircraft as it was about to take off from the runway. However, they fell down as soon as the aircraft took off and the landing gear retracted. Reports say that all three civilians died due to the fall. The horrifying sight of a man falling off the flying aircraft was captured on camera and shared by a Twitter user soon after the incident. The video showed a person, terrified of the ‘new’ Taliban rule in the country, still clinging to the aircraft even after it took off, hoping to make their way out of Afghanistan with no fear of the deadly consequence. The video surfaced on social media as the news of hundreds of Afghan citizens attempting to exit the country was already circulating. Another video from the airport shared on Twitter shows a swarm of people running along with the aircraft that was about to take off. Many of them were even trying to somehow hook themselves to the aircraft or still ‘get in’, just to avail even the least possible chance to leave the country after the Taliban takeover.