WAPDA gives cash award of Rs 2.5m each to Arshad and Talha 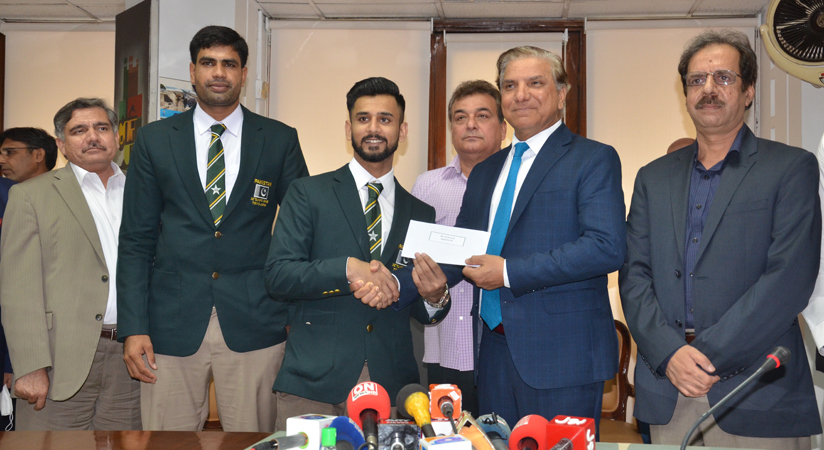 LAHORE: Pakistan WAPDA on Monday gave cash awards to its athletes Arshad Nadeem and Talha Talib for their performance in javelin throw and weightlifting events of the recently Tokyo Olympics in Japan. A prize distribution ceremony in this connection was held at WAPDA House, under the aegis of WAPDA Sports Board (WSB), here yesterday. WAPDA Chairman and WSB Patron-in-Chief Lt Gen (r) Muzammil Hussain presented cash awards of Rs 2.5 million to each of them. In addition, cash awards of Rs.500,000 to Fayyaz Bukhari, coach of Arshad Nadeem, and Rs 50,000 to Abubakar, an emerging WAPDA tennis player, were also given during the ceremony. WAPDA Member (Finance), Member (Power), Member (Water), MD (Admn), Secretary WAPDA and WSB senior officers were also present on the occasion.

Addressing the ceremony, the WAPDA Chairman congratulated WAPDA athletes on their brilliant performance in Tokyo Olympics and expressed the hope that they would excel in future in international competitions to win medals for Pakistan. Highlighting the significance of sports, he said that the lesson for struggle in life can best be learnt from sports. Underlining the significance of sports for Pakistan, he said that sports alone had the potential to resolve all of country’s issues by combating terrorism, unifying the nation and stabilizing economy. The Chairman vowed that WAPDA would make all out efforts to lift the standard of sports in Pakistan so that the country could be better placed on the medal tally in international competitions.

In an environment of gloom in the sports domain, WAPDA has been playing a phenomenal role for promotion of sports in Pakistan for the last six decades. WAPDA players have not only been showing their class at the national level but also bringing laurels for Pakistan in international competitions. At present, WAPDA is winner in 35 disciplines (19 in men and 16 in women), and runner-up in 19 games (12 in men and 7 in women-7) in National Championships. WAPDA is the biggest employer of sportspersons in Pakistan, as more than 2400 players and sports officials are associated with various units of the WSB across the country. WAPDA has 66 teams – 37 men and 29 women – of different games.